The things I have to do for the business. Today it was almost like being in a James Bond movie. I turned up at 10am prompt at the Thames Water Utilities Depot in Bow in East London – just around the corner from the site of the Olympic stadium which incidentally seems to be shooting up. I was met by Calypso Harland, bubbly marketing manager of Geo, the Alchemy owned business that sprang out of 186k’s UK fibre optic network.

I had been invited to inspect Geo’s London fibre ring which, yes you’ve guessed it, runs through the sewers. Donning layers of protective clothing I disappeared into a subterranean world for a once in a lifetime experience. Believe you me I doubt that anyone wants to do it twice.

The 140 year old Victorian sewers under London are I suppose of cursory interest. The message actually was that Geo can provide very cost effective and very secure fibre backbone connectivity because they use the sewers and don’t therefore have to dig up the roads.

What is interesting is the huge capacity there is down there. Geo run 4 ducts, three of which are currently empty. A duct can hold two fibre cables each with 288 strands of fibre. Each fibre can, using current DWDM technology, run 160 10Gbps channels (x 4 if you use phase modulation per wavelength).

So by my sums the Geo London ring should be able to operate at nearly 15 Petabits per second or roughly a billion times faster than the latest and greatest 21CN ADSL2+ connection. That’s a heck of a lot of capacity.

And for anyone that wants to know no, my thigh length wellies did not leak and no there were no floaters in sight – something to do with a high fibre diet apparently! 🙂

These sewers run on the surface (covered up obviously) right through the Olympic site. Come 2012 they will likely be crawling with security guards!

Check out the Geo video here.  Photos below: 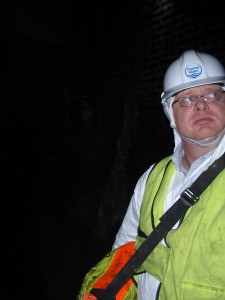 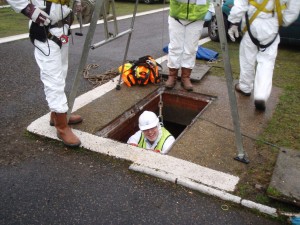 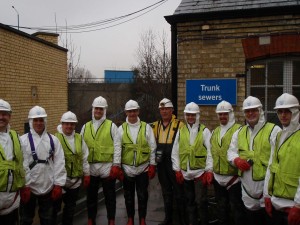 all that capacity, and all we get is sub 1meg if we’re lucky. many on dial up round here and no mobile either. wish geo would do the #finalthirdfirst.