People who know suggested I should move phone operations from HTC Desire HD to Samsung Galaxy S2 so I have. My main motivation (and you have to take this as read) is not to just have the latest and greatest gadget. Things are moving so quickly in the tech world that I need to stay in touch with the art of the possible. It would also be a good exercise in seeing how easy it was to do the migration.

In reading this post you have to consider that I am not a gadget freak and I don’t spend my life understanding the nuances of different versions of OS or processor hardware specifications. I may therefore make mistakes in setting up a new phone that the geek would not but in this I can’t be any different to most people. My other criterion for success is that I shouldn’t have to rtfm, ie have to look something up in the online support.

I have two benchmarks for comparison – the HTC Desire HD and the iPad both of which broke new ground for me.  iPad was very easy to set up but has clear deficiencies and the HTC represented a learning curve in smartphone tech.

The features I use most on the HTC are Tweetdeck, Dropbox, camera, voice recorder, internet and gallery, mail, calendar, sms and foursquare with a smattering of Bambuser,and ESPN (seasonally) thrown in. I use the internet rather than plugins to access Facebook (keep in touch with my kids) and LinkedIn (rarely) as I haven’t found these plug ins to be much cop. For some reason I don’t use the phone for Empire Avenue and I’m actually currently struggling to get my brain round why I might want to access that particular network.

So in moving from HTC Android to Samsung Android it would be useful for me to see how seamless it was migrating these apps and also the registration credentials, noting how much of a pain it is to have to remember all these account details.

It must be said that getting up and running with the S2 was less of a joy than I have been expecting and this has to be largely down to differences in user interface.

When using the HTC all the apps I have downloaded from the Marketplace are listed somewhere. I expected this list to also be available on the Samsung. It was not so I had to reinstall them all manually, individually. Not a huge problem but it would have been nice for this to have all been automatic. It all adds to the time involved.

After inserting the SIM I was also faced with what seemed to be a barrage of install wizards. Google registration was a no brainer but the Social Hub was different. Attempts to input username and password details for Facebook et al were rejected. I thought I must be missing something and parked that bit for later. At home I registered using the plug ins and it worked fine. It is only days later that I now realise that using the wifi at work the firewall was blocking some sites.

Getting basically up and running I have now been using the handset for 4 days. 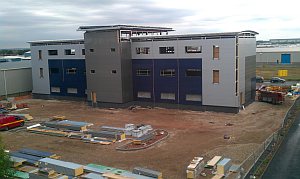 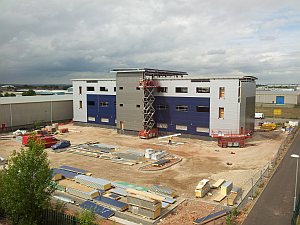 The above photos are of the Timico datacentre using the HTC (left) and the Samsung (right) from exactly the same positions – different days but similar lighting. I guess the higher Megapixel count of the S2 would account for the bigger picture – they were saved to the same width.

This does bring up an issue generally with these different Android handsets and that is each manufacturer offers its own added value bolt-ons/portal etc. These bolt ons make it easy to back up and synch address book for example, find lost phones and track downloaded apps. However they appear to be different for each vendor. In other words HTC has something that cannot be ported to Samsung (must say I am not yet an expert here – maybe I am missing something). What the Android world needs is a generic feature that does all this that will allow me to port from Samsung to HTC to ANO. Single vendor environments don’t have the problem.  Apple fanbois will gloat at this but if you stick with a single vendor I suspect the experience will not be far off the iPhone (and you will be able to view flash videos)

I am also still getting to grips with some of the features though the learning curve is not as steep as it was with my first Android. One that has stood out is the quality of the voice command function. This didn’t work particularly well for me on the HD but it is a big hit on the S2 and is light years away from the Dragon voice rec software (I think it was called dragon – might be wrong) I bought about 10 years ago!

Overall the Samsung Galaxy S2 is clearly a step up from the HTC Desire HD. It would be interesting to compare the S2 with the latest HTC but I can’t spend all my time reviewing smart phones. This rapid pace of development is also going to pose a real problem for consumers who will be driven to switch handsets far more often than they have before, at a time when these devices are still very expensive.

I’ll revisit this review in a month or so for an update.

Interesting read Tref. I’m looking at an upgrade path from my Desire HD also. I guess I’ve got no real driver to upgrade as yet, as there is nothing utterly compelling on the market for me to justify the headache that you’ve gone through!

Have you tried re-installing your apps using the web version of the Android market – https://market.android.com ? It’s meant to be able to sync your downloaded apps with different phones irrespective of the underlying manufacturer. I haven’t tested it as yet, but may be worth trying if you’re still having issues.

NB. In market.android.com (via PC browser) all your market installed apps are shown.
I’ve only the one phone registered (setting tab in market) – but wonder if you have more than one registered you get a choice to install etc. with a simple click?

Thanks guys. I’ll look at the market tip. The issue is how long do you spend playing with these things.

Btw one thing I forgot is that it really is a thin, light phone. I didn’t like the weight bit at first but now I do.

HI Tref, agreed on your Pro’s & Cons. The camera is very good for a mobile phone cam although not quite up to par compared with my old Nokia. Battery life for me is very good also as I’ve taken the plunge and rooted it to remove the silly camera click noise, which has allowed me to freeze all the extra apps that were running in the background (Social, Music, Games Hub and a few others.

Have to say I’m rightly peed off that you have to install the kludge of kies software to even take your pics off of the device, but have managed to get round that by using a combination of sugar sync and a wifi enabled phone browser that allows me to access the phones memory from my computer when the phone is connected to the home wifi.

All in all though, I’m very happy with it as a replacement to my old one but don’t like the hand holding and extra rubbishware that’s on it as standard. 🙂

Thanks Edwardo
The question is whether rooting the phone is viable for your average punter? I can’t believe Samsung won’t take note of this issue and do something about it
tref

Just a quick note, the desire HDs hamera is 8mp, so the camera quality on the s2 must just be better somehow.

That’s not very scientific, is it? Unless the photo is taken under the same identical conditions how can that be a fair comparison?

You are of course absolutely right Peter though I do now have many photos taken with the S2 and by and large they are brighter. When I get back from my hols I’ll look at doing a more controlled experiment.