One of my massive cricketing heroes is Sir Viv Richards and I was privileged to sit at the same table with him at lunch in the City yesterday. Click on the header for a bigger shot – the guy on the left is my friend Umar Bajwa who is IT Director at the Murphy Oil Company (Murco).

We were treated to four hours or so of entertainment that included very interesting anecdotes from Sir Viv and also from Australian Fast bowler Rodney Hogg (41 wickets at 12.85 during the ’78-79 Ashes series for those who like to know these things).

This being a Friday I have another competition for you.  Who is the black guy to the right of Viv Richards in the small inset photo?

I had not heard of him myself but I’m sure that many will have seen him in action. Again click on the photo for a bigger image. Usual prize is up for grabs (while stocks last). He is also in a couple of the photos below. 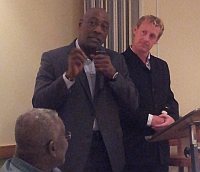 The final photo  is of the auction of a signed print of a photo of Rod Hogg taking the wicket of Sir Geoffrey Boycott. There was not much love lost between both speakers and the bold Sir Geoff. The photo was  signed  by Rod not Geoff.

I have to sit on my hands on these occasions otherwise I end up coming away with auction prizes as a “surprise” for my wife.

At a Lincoln rugby club charity dinner I was once used as a stalking horse by an auctioneer trying to drive the price up. Having made the initial bid for a signed photo of the Red Arrows I firmly sat on my hands. The whole room, however, thought I had bought the photo and imagine my wife’s surprise when, after picking the kids up from school the next day, she was asked if she liked her new photo.  Funnily enough she could think of better things to do with a couple of hundred quid 🙂

By the way if you are wondering about the title of this post what I really mean is that I went to see Viv Richards play at Trent Bridge in 1984. He had just scored a massive 189 in the game at Old Trafford and received a standing ovation from the crowd as he walked out to the the crease. Despite being England fans we were there to see the great Viv Richards score a big one. You have to imagine the stunned and disappointed silence of the crowd when he was out caught behind for two runs. Ah well at least I saw him play and have now had lunch with him 🙂

PS Nobody won last weeks competition but  I did get two comments so if you can let me have your address there will be a mug in the post for you.

9 replies on “Me and Sir Viv Richards go way back”

Nope. Learie Constantine died in 1971 as I recall and Joel Garner is a lot taller. Keep em coming.

It’s not Charlie Griffith is it?

Looks to me like Rudolph Walker of Love thy Neighbour and more recently Eastenders fame. Am I right?

Well done Graham, Rudolph Walker of Eastenders is the right answer 🙂 Bit of a shame to see the answer come so quickly. I thought I’d get a bit more mileage out of this one but there again the last time I watched Eastenders was about 20 years ago or more so who am I to say. If you can send me your address I’ll get a mug in the post to you 🙂

Thanx Tref! I will DM you on Twitter….perhaps I watch a little too much telly?
Regards, Graham

Bum!!.. can’t believe that.. my first thought was it it looked like Patrick from Eastenders. Too scared of giving a silly answer to say it (and it doesn’t count otherwise).
I should have learnt my lesson at school – don’t be afraid to put your hand up and look silly!

Just proves that sometimes the simple, obvious answer is the right one!

Tref – you delivered a googly saying you hadn’t heard of him… how could you not have heard of Patrick Truman… “yeairh maairn” **you detected the Jamaican accent there, right?** 😉

I really haven’t heard of him. I don’t watch much TV and the idea of watching a soap would freeze my brain.

I’ve only just seen this:
“PS Nobody won last weeks competition but I did get two comments so if you can let me have your address there will be a mug in the post for you.”

That’s good of you Tref, but I’m happy to wait for a real win 🙂
…Really I’m letting my mug ‘roll over’ to an umbrella!