We operate a fair play system at Timico. Staff who work 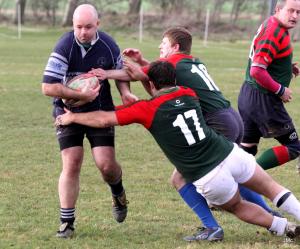 hard during the week are allowed out on Saturday afternoon to engage in a recreational activity of their choice1. A happy employee is after all an effective employee.

Some of the sales guys play rugby and last weekend Steve Hodges, Andrew Fox and Guy Beales formed the mainstay of the back line for Newark 4ths versus Notts Paviors 4ths.

Apparently they scored half of the points. The first three pics show Andrew Fox bursting through his tacklers then driving forward to score a crucial try that no doubt crushed the Paviors’ morale and set the game 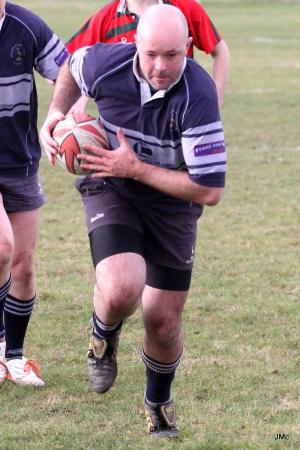 up for the home side.

The other pics are of Steve Hodges. In fact there is a caption competition for the first one at the bottom. The best caption gets a bottle of red I have been keeping in one of my desk drawers for a special occasion. The second photo shows Steve running with the ball. He must have beaten his tacklers because there is no sign of anyone else in the shot. Either that or it was taken after the game.  You can decide 🙂

In a similar vein I note that England were beaten by Wales at Twickenham on Saturday – bad luck chaps.  Should have taken advantage of the 10 minutes that we were a man down really. I’m going to Cardiff on the 9th March to see Wales play Italy –  if anyone is in town that weekend let me know & perhaps we can meet up.

You can have till end of play on Friday to come up with a winning caption. This competition is open to all comers including Timico staff. 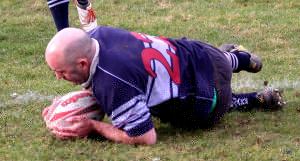 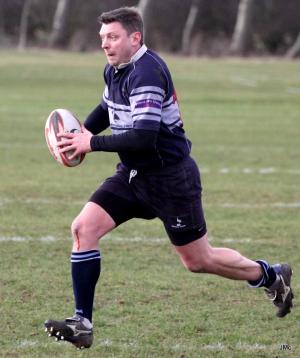 1 as long as they are back in the office by 6pm to make up their shift – they then usually get away for last orders at 10pm – fair dos.

“How can I give this ball away before crossing the line ? To score a fourth would just be showing off !” 😉

“Nevermind the ball, that giant blue and white stripy lolly is mine”!!!

QUICK Someone take this hot egg away from me!! I need to be back to the office by 1800 or they make me dress as a blue and white toffee next Saturday afternoon!

“Stop shouting at me, I can’t hop any quicker”

How long is the fuse on this thing?

“Someone grab this. My socks are having a wardrobe malfunction!” 🙂

Excuse me, terribly sorry to bother you, but is this your ball?

Quick its gonna hatch and please dont let it look like me for gods sake !!!!!!

Can I do a photoshop instead? 😉

Ahhh! Got to get Foxy’s head back on his shoulders before he misses it!

It’s my easter egg and I’m not sharing it! If you want it you’ll have to catch me!

Steve the Scrat (for all Ice age fans)…

I wondered what Alison’s comment was all about for a minute – not having seen Ice Age. Looking at the pictures in the link I thought it was a bit near the knuckle until I realised that Scrat was carrying an acorn 🙂

btw now that I am in the office I can confirm that the megaprize is a fine bottle of Jacob’s Creek Shiraz Cabernet vintage 2008. Goes well with steak, pizza and tomato based dishes.

Seeing the excitement on Steve’s face as he ran toward his own try line, his opposite number was happy to let him by – but was fearful of the ensuing tantrum.

…half a second away from that hospital pass….CRUNCH!

“This morris dancing has changed from when I were a lad…”

Foxy was right, if i manoevre like this i can let out a mahoosive fart!

How do you eat yours?

Gotta get this bduk egg back to the dinosaurs in government before they realise we have hatched a plan to deliver our own broadband to our area, move over you guys and let me through. They can sit on this for another decade.

“Quick, I think it’s about to hatch!”

Steve was convinced he’d been given a genuine Norwegian Ridgeback egg.

Look what the Doc gave me as a reminder of my prostate examination.

We have a winner. It was a very difficult one to judge so I roped in Chris our CEO who applied his vast experience of entering caption competitions to chose the winning entry. it was a very close run thing so I am going to award a runners up prize which will be a Timico umbrella or mug or simlar – depends what I can find in the cupboard.

Anyway the winner is Joe Baguley and a very creditable runner up in second place being Frank E. Alison ran in third, partly because Chris has seen Ice Age about fifty times as it is a favourite amongst his kids 🙂

I’ll contact you guys seperately to sort out posting the prizes.