I tried to buy Olympic football tickets this morning. 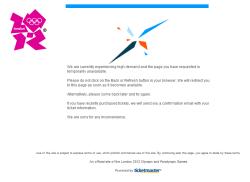 I want  to take one of my kids because he is a big fan. You know how it works.

I went onto the ticketing website at 5.30am to sign in and make sure all was well in preparation for 11am when the tickets went on sale. All was not well. When looking at my “confirmed tickets” I got the screen shown inset on the right. “We are currently experiencing high demand and the page you have requested is temporarily unavailable”. Unavailable my foot – at 5.30am!

On previous occasions the message has said that the info is not available “whilst seat allocation is taking place”. This was the message for the last few weeks. Gimme a break. How can it take so long to allocate seating using an electronic system. It can almost certainly be done at the flick of a switch.

Back to today.  Just before 11am I signed in to tickets.london.com, had a play and then at 11am was able to order tickets. Whoopee. I entered my Visa (proud sponsor) card details and at the last moment as the system was doing the final card processing the whole thing crashed and I got a message that left me totally unsure as to whether I had been successful in buying tickets. It suggested I might have but I should check my account status. Of course the account status page doesn’t work (ref inset pic again!).

An hour later I tried again after having at staring at the screen telling me not to click on the Back button.  SOLD OUT, or so the system says in its own words – though how it can tell I have no idea because nobody else can!

The BBC tell me that have had a number of people complaining about exactly the same thing. As far as I can see the only way I’ll actually be able tell if I have been successful in my ticket application is to see if any cash has gone out of my bank account (for which I have to wait until the family CFO is home from her day’s teaching).

This is an event that has been in planning for years. There must have been some incompetence somewhere and at a wild guess it could be ticketmaster.  How can an organisation that sells tickets for events like Glastonbury, events that sell out hundreds of thousands of tickets in hours, get it so badly wrong.

All I can say is that they should fire the person or persons responsible and whatever happens make sure that they don’t get tickets to any of the Olympic events. I am not a vengeful person but on this occasion I am willing to make an exception.

As a footnote this doesn’t give me confidence that anyone will get any tickets in time for the games, which would of course be a disaster of the highest magnitude.

PS I have no proof that ticketmaster is at fault but the site does say “powered by ticketmaster” . In this case it should read “not particularly powered very well by ticketmaster”, or ticket very much not master.

PPS oh and if London2012 want to take me to court over use of Olympic 2012 logo without permission  they are welcome to do so. I’m not happy.

Rant over. I’ve calmed down now.

17.07 latest news is that I have discovered that the cheapest tickets are still available for my game and I have successfully bought some. I still get the “we are too busy” on my account status so something is not right, and it can’t be volume of traffic because as I said before I don’t believe it could be the case at 5.30am.  I just hope now that I haven’t gone and bought two lots today!

I have met so many people disappointed at not getting tickets for the Olympics. Today one of the people in the office told me her brother had successfully bought over £6,000 worth. Something wrong somewhere.

17.28 next day – update is that I can now see my tickets and guess what? I seem to have bought two lots!

One reply on “Ticket very much not master”

I went to the site you linked to and the Netcraft toolbar I have installed on Firefox indicates that the IP is in the States and is not registered to the likes of Akamai.

I would have expected Ticketmaster to engage a provider with distributed processing abilities as they know the site is likely to be subject to high demand.

I’m glad you got your tickets in the end although Im not a huge fan of having the Olympics here due to the financial state the country is in.