I was back in my London ied a terre  garret last week – the Kings Cross Traveloge (header photo is view from my room lifted from their promotional literature). I was heading out to dinner for the evening but hooked up to the O2 LTE trial service to finish off some stuff.

I was getting 15Mbps down which was good. Seeing as I was going to be out all evening I decided to run a usage test based on 5 video streams. I loaded 3 iPlayer and 2 ITV streams (for a bit of variety – no other reason though I’d consider myself more of a BBC man than ITV – it’s Blue Peter versus Magpie for those of a certain age) and watched the usage grow.

The screenshot below is at the beginning. I’d been online for 39 mins and in that time downloaded 135MB. Most of that usage was in the last few minutes of the session as my emails/tweets hadn’t used much. 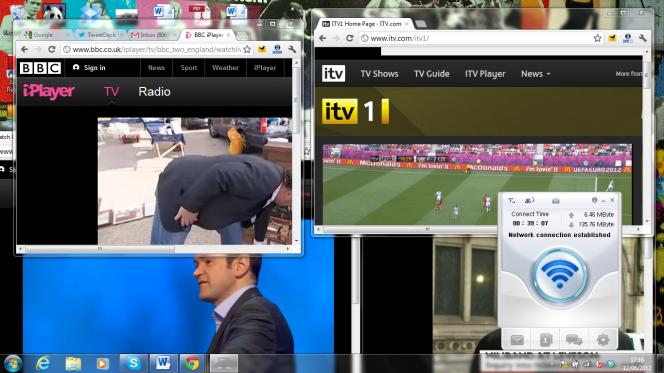 I got back in at midnight and disappointingly the session had crashed. Although the dongle had reestablished connection the streams had stopped. This is not a criticism of the service. This kind of thing would happen with any mobile service or network.

Fortunately the logs came to my rescue. The session ended shortly after I left the room but in the 4 minutes since the above screenshot was captured I had used 53MB of additional streaming data. That suggests a rate of 1.7Mbps – each stream only occupied a small amount of screen.

I hadn’t looked at the logs before but I discovered that I had been online for a total of 7 hours and 9 minutes during the trials and consumer 3GBytes of data. That’s just a few short trips. Effectively one working day.

I’m going to be naughty here – if once the service is in production I assumed that  I would use 3GB every day of the month that makes it 93GB of usage in one month. That’s a lot of data.

I know you will argue that my usage as described here is not representative of real life situations. Who is going to stream 4 or 5 video sessions? Other than the scenario where 4G is in use as the home broadband connection the answer to this is probably nobody. However one HD stream could account for more than all 5 of the streams that were giving me the notional 1.7Mbps data rate.

What I’m really showing you is that our mobile data usage is going to grow and grow, especially with the advent of 4G/LTE. The business of the mobile network is going to change to reflect this. Charging for voice minutes will soon be a thing of the past – I suspect much sooner than we think. Everyone is going to use Over The Top voip services.

That’s all for now in the continuing sage of the O2 London 4G trials. All interesting stuff. The service is great btw. I can’t wait for it to become mainstream in the UK.

If OTT VoIP becomes common, then I hope there are QoS options on 4G. Hard enough to even handshake a 3G session in London, and I find 3G+ towers dropping back to E at busy times.

Are session limits per cell tower better with 4G? e.g. might cope with a full london train station at last.

no but LTE has much improve self optimisation, and as its all IP it handles interruptions much better.