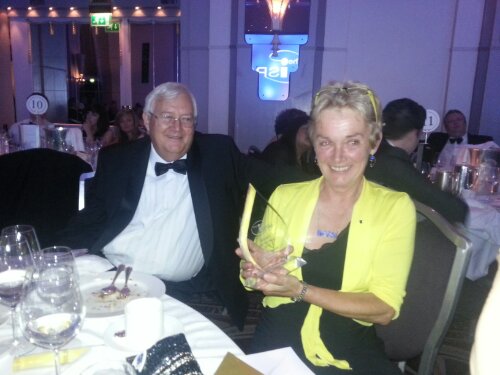 We need a new approach the combines the best of the scale players with the commitment of local activism – not as cheerleaders, but as co-investors in the development of the new telecoms infrastructure. Congrats to B4RN for their continuing success 🙂

Thanks to everyone at ISPA, I have never met so many awesome people in the online world in one room before.
It was a fantastic do, and we were so proud to represent the fantastic community of B4RN in thatLondon. The keynotes were mega, and although we were happy just to be nominated it was amazing to actually win the award. Thank you to the industry peers who have embraced the rural broadband cause and voted for us. Lancashire salutes you.

This is absolutely fantastic news. I was watching the updates on Twitter and as Chris has already said, it was great just to make it to the final but to hear that B4RN had won it was just something else.

Many people in our community have put hundreds of hours into the project because this is what the community needs and wants in order to thrive in the future. Many people in the wider community have also supported us, be it by writing about B4RN, sponsoring, investing or even spreading the word. All of this we know refer to as “B4RNstorming”!

Last week Chris was in Brussels and B4RN received the support and admiration of Neelie Kroes, the VP.

So we now have confidence in what we are trying to achieve from the community, the industry and Europe. What we now needs is some action from the UK government showing some similar support. With the exception of some local MPs, namely Eric Ollerenshaw, there has been little or no domestic government support . This has to change.

Well done to the B4RN community!

Congratulations to all involved – thoroughly deserved.