There are really two sorts of place where we will want access to good comms, apart from pubs where we may well retire to after a long hard day watching others exert themselves. These are the sporting venues themselves and the areas en route to the events where we will be arranging to meet pals, uploading photos and letting the whole social media world know that we are going to the games whilst they are not:)

Stadia have always been a problem when it comes to mobile network coverage.  The traditional way of covering a stadium was to point antennae from nearby cellular base stations in the direction of the venue and to have a few high capacity macrocells cells inside the actual stadium itself.

This setup causes problems because the macrocells transmit at high power and interfere with each other creating a generally poor mobile experience. Interference is normally minimised in cellular networks by siting antennae where the natural landscape or city scape shields one cell from another ie a building will naturally stop one cell from overlapping the next.

This is not the case in a stadium where everything is open and the cells have nowhere to hide. The other problem is that spectators are usually sat still in the same spot for most of the sporting event. This means that uniformly good coverage has to be provided otherwise people will notice if they are sat in a bad spot – ordinarily when people are on the move they will walk in and out of strong signal areas and are less likely to notice poor coverage.

For the Olympics this is all exacerbated by the fact that the forecast is that the networks will need 10x their normal capacity inside the venues – all those photos of Usein Bolt again (don’t let me down now Usein :)). 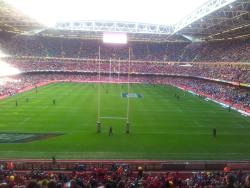 So what is the answer? If you have been to Twickenham in the last year or so you might have been experiencing the solution without realising. The rugby stadium (being Welsh I hesitate to call it the “home of rugby”) has been used as a test ground for a new high capacity mobile system.

The 4 cellular base stations inside Twickers were replaced with 40 smaller ones with antennae designed to focus on a smaller more specific footprint. Being smaller and also being positioned closer to the spectators these cells transmit at a lower power and therefore are less likely to create interference with their neighbours. The old cellular base station antennae pointing at the ground were also redirected.

Every stadium has a different shape (so I’m told) and whereas the original Twickenham trial used 40 cells targeting 10x increase in capacity the practicalities of the final implementation led to only 30 cells being used achieving an 8x capacity improvement.

The trial was a great success and also demonstrated that additional coverage needed to be provided outside the stadium when people were walking around (before and after the game and at half time) and in the bars and executive boxes which I can confirm needed improving :).

The learnings from this trial were applied to the Olympic venues all of which were different shapes and which needed individual designs done.

The Aquatics Centre for example is around 175metres long by 90 metres wide – not all pool of course – you have to sit somewhere. You can see from the photo it is a weirdshape. The initial design forecast a need for 28 cells of varying spectra (900, 1,800 and 2,100MHz) and technologies (2G/3G). The non-uniform geometry & materials (eg aluminimum roof in some areas but cloth in others where the need is more temporary) of the Aquatics Centre led to the model for coverage being changed and a total of 36 cells ended up actually being used.

Introducing a purely personal slant on this I’ll be inside the Aquatics Centre on the evening of 9th August and will make a point of updating you all on the performance of the cellular network.

Noting the lessons of Twickenham the cellular networks have also clubbed together to ensure that the user experience outside and en route to the Olympic venues should also be good – lots more cellular base stations and wifi hotspots. BT alone will have 500,000 hotspots around London including 1,000 in the Olympic park.

ta Ted – sorted 🙂 it does actually look great from the photos but I couldn’t be bothered to root out a nice one off the most helpful people at London2012 so I just took the first one I could find. It’s also partly a temporary structure – some of it will be removed post games which apparently contributed in part to the complexity of fitting it out with the comms.