You probably don’t know but when I was 16 I worked as a projectionist at the cinema in Summerland in Douglas Isle of Man. It was a great summer job – I saw the James Bond movie Spy Who Loved Me  50 times in the space of a fortnight 🙂

In Lincolnshire last weekend was the 90th anniversary of another 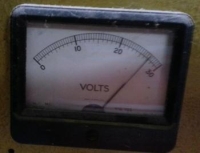 cinema, The Kinema in the Woods in Woodhall Spa. I went along for the open day and got to see places where the public weren’t normally allowed – in particular the organ room and the projection room.

We used to play vinyl records during the interval – you know cowboy theme tunes and other tracks suitable for cinema listening. The Kinema has a restored Compton organ, a magnificent beast with a huge array of pipes backstage and which runs on a 28volt supply. Nothing was 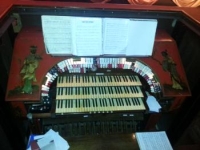 standard in those days.

Things have moved on since I was in the trade, even at the Kinema which prides itself on its olde worlde quaintness.

The old Peerless projector has been replaced with a new digital job that cost £50k including server. Instead of shipping 6 reels of movie film the studios now just send a hard drive with the digital movie on it. The latest Batman movie – Dark Knight was 304GB I noted. This is a 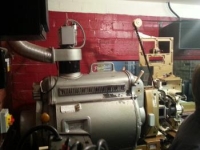 massive cost saving for the studios as each film cost knocking on a couple of thousand pounds to print.

I got to use a film splicer which took me back – same one I used in Summerland. I’ve still got a few frames of The Spy Who Loved Me somewhere at mams and dads after I had to do some emergency repair work mid movie.

Some big names had turned out to support the open day. It was the 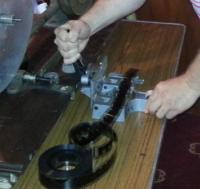 least they could do after all the Kinema had done for them. I’m pictured here with Humphrey Bogart who you will remember from Casablanca and the African Queen. Classics both. He’s wearing well.

All in all we spent a very pleasant couple of hours there being entertained by the organist and watching old shorts such as Laurel and Hardy and the Road Runner and Wylie E Coyote.

Finally the embedded video is of the organ in action including the bit at the end where it sinks back into the stage. Enjoy… 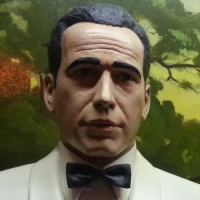 PS Summerland got demolished a few years back. The remnants of my childhood gradually being erased.