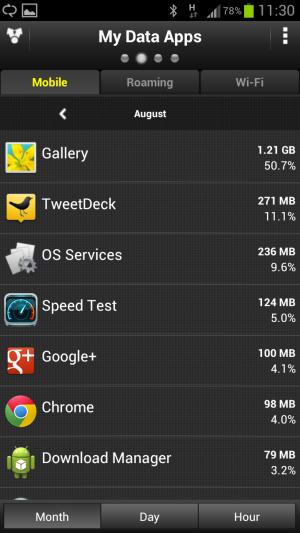 It’s been a busy month on the mobile internet usage, what with the Olympics and being on holiday. So far this month, and it is pretty much over, I have consumed just shy of 20GB of internet bandwidth using my Samsung Galaxy S3. That’s 2.40GB of 3G/mobile data and 17.13GB using WiFi.

My hard drive tells me I have taken 9.38GB of photos and videos and I’m sure there are a few sound files on top of that though they won’t contribute much towards the total.

The first screenshot shows the applications that were the heaviest mobile data users.

Note that Gallery is the number one user by far. I like the way that Android pulls down albums from my online Google+ store but clearly there is a price to pay for this with the data usage.

At number two Tweetdeck comes as no surprise and I’m thinking OS Services must mean operating system upgrades and / or general system management though I’m not totally sure about this. I’d normally save any major OS upgrades for WiFi.

During the month I did a lot of speed testing which shows up in the stats as that app came in fourth. 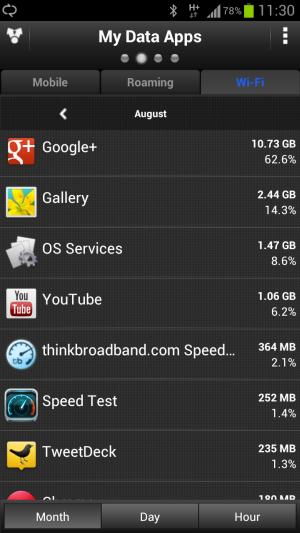 Straight internet access/web browsing was only the 6th most popular activity! In total 56 apps used the mobile data connection to some extent in August!

The next screenshot is of the WiFi usage from the phone.

Obviously it was used a lot more when in range of WiFi.

You can see that the amount of photographs taken is reflected in the usage of Google+.

I also took advantage whenever I had good WiFi, as I did in a number of places around London, to upload videos to YouTube. This way I could easily embed a video in a blog post at a later date whilst on the hoof.

In all 55 apps used the wifi connection in August.

The next screenshot is somewhat revealing and in some respects tells me I need to get a life.

I spent nearly 26 hours in the month using Tweetdeck wtf?! That’s almost an hour a day. 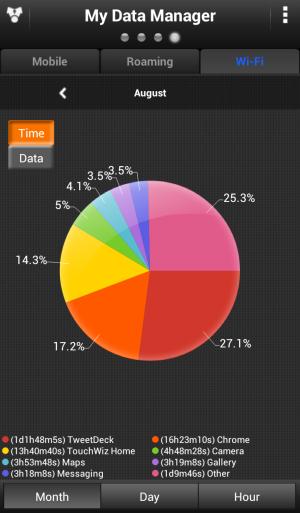 16 and a half hours using chrome. Interesting to note that the times spent on specific applications haven’t resulted in those apps beign the heaviest users of mobile data. Shows how light Twitter traffic in particular is.

Then it was nearly 14 hours using TouchWiz which is the Samsung user interface. All that time spent prodding the phone. I’ don’t know how much time is allocated per prod but this seems to be a lot.

Maps I can understand – that four hours is probably a couple of car journeys.

I’m not sure I know what to do with all this information but it is certainly food for thought.

You can see from the pics that the app I used to gather all this data is My Data Manager. It’s great. Go get it and let me know about your own usage.

This is why I always turn off background data and only leave wifi on, switching manually to mobile broadband when I’m away from home. It’s amazing how much data some apps suck just to keep the latest updates on-screen and avoid you needing to press “refresh”. Frankly I am happy to press refresh if it saves me money, which it does.. a lot of money.

Apart from wifi only for G+ backups I switch off the heavy usage stuff and have email and twitter on manual refresh. Otherwise I let the phone do it’s stuff. I figure that’s the future.

Tref, it would be very interesting to see where your usage of that old fashioned App called “Voice” featured in terms of hours/minutes of use during the month (albeit this would obviously be over 3g and not Wi-fi), compared to the usage reported here across the various classes of data app. This would then give an idea as to how the balance of usage might look between Voice and Data, when 4g comes along, and all us in the class of techno-mass-adopters catch up with you!.

TFG
voice will almost certainly not be be up at the top though it might be in the top ten. i’ll take a look when I get in on Monday – it will be interesting to compare.