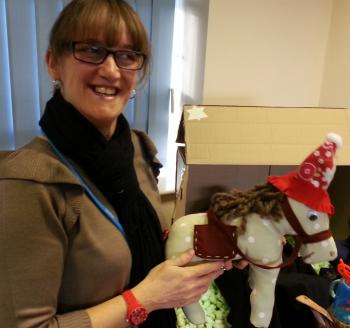 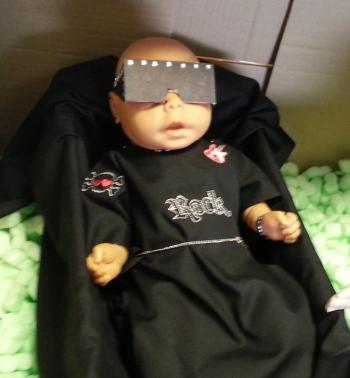 That must be Dominic the Christmas Donkey.

Not Dominic, no. Keep em coming everyone:)

Cheggers is a good name but that is not the name of this Donkey.

Nice work on the baby Jesus, whoever did that. Jesus Christ Superstar?

Also, please confirm – what on earth is the blue thing in the top right of the uppermost image?

Today, of all days, there’s only one name for a donkey: Theresa…. 😉

Anne – it would appear to be a robot innkeeper 🙂

Oh and it isn’t called Daisy – nice one though.

It must be Pedro

Nope not Pedro though it occurs to me that I haven’t specified it’s sex. I’m going to leave that bit vague for the moment as it will give us more naming options

I like your thinking and it does indeed look like a Sybill to me but that is emphatically not the name of the donkey:)

Any clues? Company or tech related?

On a day like today, there’s only one name for a donkey: Theresa!

Not Theresa no Paul but thanks for the try. pctech – it’s too early for clues. I will review that position in an hour or so

Not Timothy no, though I will mention to Tim that was one of the answers 🙂

OK I have decided to give you a clue. This donkey’s name is to be found in newspapers

Well it must be Rebekah then

Not Murdoch nor Rebekah nor Ed, Brian or Sue. However Murdoch is getting closer and the name is alliterative in conjunction with the word “donkey”.

Gotta be Leveson then.

now how is Leveson Donkey alliteration?

Yeah ok, I’m full of cold so my brain isn’t firing on all cylinders or should that be processing on all cores.

That’s my excuse anyway and I’m sticking to it.

If I found the right clue then I guess the donkey’s name is Kevin Rudolph!

I don’t know how to spell it…

Guy & Karen – getting colder.
Rob – getting quite warm 🙂

Remember the clue is this donkey’s name is to be found in newspapers. This is a cryptic clue.

Obviously I got the wrong clue then, Tref! Joseph looks like ‘Freddie’ and baby Jesus appears to be dressed in rock swadling. I applied (women’s) logic and arrived at the (wrong) answer! Kevin Rudolph (American rock singer/rapper) got to No.5 in the UK charts with ‘Let It Rock’ in 2008. Er, are we allowed more than one guess? 😉

Got to be Daily then.

Desmond it is:) Hooray. I knew Emma would get it. Well done:) One mug will be winging its way south for the winter (once you have let me have your address again coz I’m sure I’ve lost it (all part of data protection act compliance)

I would also give Dave Funkypancake a pen for his Lidl Donkey entry despite not having listened to any of the clues. However because he lives in New Zealand I can’t be bothered.

Thanks to all who played the game. Look out for another competition tomorrow. No idea what format yet but I still have plenty of supplies of Timico Megamugs:)

Congratulations to Emma. Commiseration to Dave Funkypancake. I loved his answer 🙂

i believe eeh haw is the donkey name

Very different Rob. When drinking out of a Timico Megamug great things can happen. It has been said that had Mallory taken one with him on his failed attempt to climb Mount Everest he would have survived to tell the tale. Same for Captain Scott in the Antartic.

In more recent times the distribution of the Megamugs to warring armies would ultimately have led to world peace. Unfortunately there is a limited supply and I have most of them in my possession. I therefore have limitless power mwahahahahahahahaaaaahaaaaaaaaaaaa.

for me, it was the mug or nothing. i don’t need no domestic-only Timico pen, girlfriend 🙂