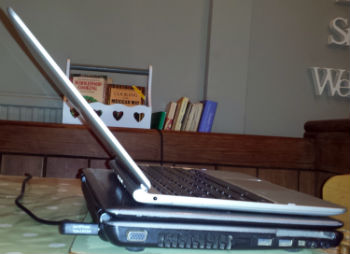 Sat in front of the first roaring open fire of the season tonight. Well it’s more of a nice crackling sound than a roar but you get my drift. I’ve got my Dell laptop back but I’m still using the Chromebook. I’ve been using it all day and still have 1hr 13 mins left on the battery. It’s now ten past seven in the evening.

I’m going to be announcing #trefbash2013 soon and in preparation did some photo editing using the Dell. Only because I had my Western Digital 2TB drive plugged in to restore some of the files onto the repaired  machine and the photos from last year’s bash were on it.

I used pixlr.com instead of irfanview which was always my preferred photo editing tool. My behaviour has changed forever. I noticed that when I restored the files from backup some of my work folders were not saved. My bad. When I changed to Windows8 I didn’t set the backup folders properly. It isn’t the end of the world but it does make me think that if I’d been using a cloud based resource all along I wouldn’t have that problem. In theory.

Having bought the Samsung Chromebook I now see adverts for new Chromebooks left right and centre. Better sound quality, lighter weight, longer battery life, nicer colours etc etc. My thinking is that a Chromebook doesn’t have to have much of a spec. All the smarts are in the cloud. The one I’ve got is perfectly good and I imagine could last me much longer than the laptops of old – especially my Windows8 Dell which is now on its second hard drive.

The sound quality I have is perfectly good. The battery life amazing. And I quite like silver or whatever the colour is. The marketing guys that work for hardware manufacturers are going to have to work overtime in future because the way I see it the pricing of these things is going to tend towards not very much at all. There ain’t going to be very much money in the hardware. It’s been like that for a long time already and it’s going to get worse.

One of the kids needs a new laptop. I’m deliberating getting him a Chromebook but the sticking point is his games. I’m going to have to sit down with him and see if they are all available as online versions. Ve shall see:)

It’s now half past seven an the battery miraculously has 1hr19 minutes left. Marvellous innit?

Mind you I did notice that the new HP Chromebook comes with a micro USB port for charging – much better than the pin-like connector on this Samsung! 🙂

Just plugged in the power supply and noticed that the batter charge level indicator tells me how long till it is fully charge – 1hr34 in my case. Cool that. Soz if this is not new to you.

Just don’t try to use it while travelling, or want an optical drive, or want more than 2 usb devices plugged in.

It worked fine for me when travelling using the MiFi and an EE sim & I only seem to need 1 USB port, occasionally.