There comes a time in a man’s life when he must visit an icebreaker. The cognoscenti amongst you, and I know there are many, will know that an icebreaker is the ultimate boy’s toy. 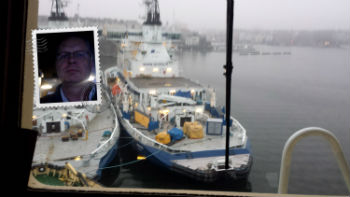 You may talk about fast cars (0 – 60 in 3.5 seconds) or the latest and greatest (Android) gadget but let me tell you that none of them come close to being as cool as having your own icebreaker. Urho, moored for the summer months in Helsinki, is such a beast. I visited Urho  on Sunday.

An icebreaker is something where size really does matter. A few numbers would aid the understanding. Five main diesel generators 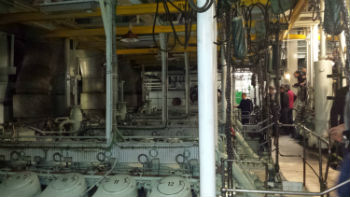 with 22,000 horsepower can generate 17 MegaWatts of power – yes I said 17 MegaWatts!! That’s enough to supply 708 houses with standard 100Amp feeds. Basically a small town. They typically use 40 tonnes of diesel a day but can peak at 100 tonnes.

The diesel generators don’t power the ships four engines, two in the front and two in the back (sorry none of this bow/stern stuff, nosiree Bob :)). These are driven by electric 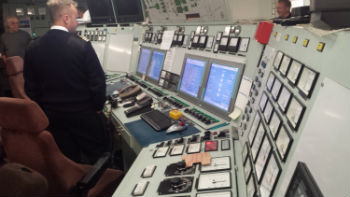 motors. The stress put on diesel engines would be too great of they were directly driving the propellers. They have to go from full power forwards to full power backwards at the flick of a switch.

There is more. A normal ocean going ship will have “stabilizers” to minimise discomfort to its passengers. Not on an icebreaker. An icebreaker has “destabilisers”. 1,000 tonnes of water can be pumped from side to side of the ship to create a rocking effect. You have to have good sea legs to work on an icebreaker. As the ship’s sides rock against the ice some lubrication is provided by air bubbles released from underneath.

The main method of crushing the ice however is from the sloping bow (oh ok then). The ship “climbs” over the ice and crushes it with its weight. Doing this is obviously quite stressful on the ship itself so as you can imagine it is built from very thick metal plates. There was some debate afterwards about the thickness of these plates. I thought they were 3.5 cms thick but others said 9cms so I’m not sure. Anyway they are thick plates. The median thickness of the ice in the depths of winter is 80cms.

The season is of course the winter. The seas around northern Finland freeze every winter. It’s a tough part of the world to live in – Helsinki is only 60km from St Petersburg. The country still has to function so the icebreaking service is provided free of charge as part of the standard shipping license fees paid by each boat operator.

Each of the four icebreakers assists around 250 ships a year. I say assist but really I mean rescue. The icebreakers come to the aid of ships locked in ice. In fact they only come out when the ships are stuck. Typically they will circle a trapped ship and this usually does the trick. Occasionally they will have to tow the “customer” (struggling to find other suitable nouns so I don’t have to keep using the words ship and boat).

The freed boat will follow the icebreaker, sometimes as close as a few metres behind because the pressure of the ice field soon closes the gap.

The ship’s company of 21 persons includes a captain and four watch officers together with engineers and other ranks. The officers and other ranks eat and live separately. Watches are 6 hours on six hours off. It’s an all consuming lifestyle during the season.

These icebreakers are big. 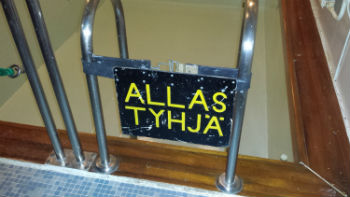 The accommodation is also fairly extensive and includes a gym including a ping pong table, sauna (two – officers and other ranks) and even a pool. The pool was empty when we were there. Empty of water that is. Note the sign reads “allas tyhja”. That is for the benefit of litigious American readers – in case they are daft enough to dive in and hurt themselves.

So there we go. Icebreakers. Every bloke should visit one at least once in their life. Been there, done that. Tick.

As a footnote I visited Helsinki for Euro-IX 23. On the Sunday morning the sun, low in the northern hemisphere sky, was dazzling. Helsinki looked beautiful.  Later and without warning the mists descended and you began to get a sense of what like would be like in the winter at such latitudes. Stay warm and take care…

A quick Google search for [ urho icebreaker ] turned up several stories and lots of pictures. Now let’s see – where does one mount a refrigeration coil or two on the tub so that one’s model boat has some ice to break ?

Thanks Ted. I’m reasonably thrilled to say that the same search brings this blog post up in 4th place on google – that’s using an incognito window.I may have found my niche:)