With a couple of weeks to go the regular UK Network Operators Forum (UKNOF) meeting is seeing very healthy growth in registrations. 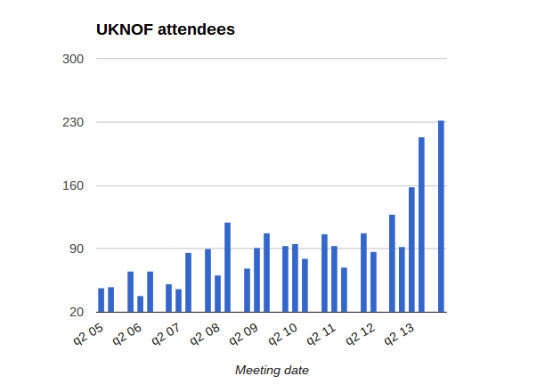 Take a look at the chart. Waaay back in the actually not too distant past UKNOF1 in May 2005 had 47 folk in attendance.

If you are in the game you will recognise quite a few names there.

Today, at the time of writing and with a couple of weeks to go, there are 232 people signed up.

A fair bit of this growth has come in the last 12 months which must sure be an emulation of other economic indicators. Although not all companies are doing well the well run ones are. I’d expect the final numbers for UNKNOF27 to exceed 250.

UKNOF meetings are not for the layman but if you are in the business the agenda reads very well – indicators of what’s going on in the internet plumbing world.

This meeting includes talks on:

These are all subjects that, if you but knew it, affect everyone on the planet one way or another. We may all want a website that uses the new gtld (.plumbing might become cool:) ).  Faster home broadband means that networks need faster and faster connections to carry the traffic back and forth from the internet (etc). 100GigE which has been in development for years was first mentioned on this blog back in 2010 but still only has 2 organisations using it in the UK (BT & Janet).

You may not notice a DDOS (Distributed Denial of Service) attack but every now and again if you have problems accessing particular websites there is a fair chance that this is because of DDOS. Even an individual broadband connection occasionally gets attacked – usually if the person at the end of that broadband has upset someone else. The internet is certainly still in the wild wild web stage.

The fact that sponsors line up to support these events is a testament to the quality of the meetings and of the attendees.

That’s it for now. I’m going to UKNOF27 and will perhaps update on final numbers on the day.

PS took me ages to get the chart exported from google spreadsheet. There is a known bug that has been at least 2 years in the fixing (not). In the end I had to take a screenshot!

Seems to be a broken link to the 2005 attendees for me Tref.

Hmm thanks Rickie. Seems to work for me

Uknof1/attendees-350.html
There is currently no text in this page. You can search for this page title in other pages, or search the related logs, but you do not have permission to create this page.

Ah – just realised I may need an account on UKNOF – setting up now.

The UKNOF talk may not be by Leo directly, we’re awaiting a final name as it were.

His name will do for now:)

“100GigE which has been in development for years was first mentioned on this blog back in 2010 but still only has 2 organisations using it in the UK (BT & Janet).”

This statement is factually incorrect.

BT + Google both have 100G LINX connections (as listed on the LINX member speeds list), Janet have publicly said they have deployed a nationwide 100G WAN. LINX themselves also use 100G extensively within the Juniper LAN too. I know of at least another 5 organisations who have 100G interfaces live in their UK based networks today.

Ah thanks Nat. I need to keep up to date. There again there are plenty of people around ready to put me straight:)

Thanks for the summary graph and your support and excellent words about UKNOF. The at-a-glance growth of UKNOF shown in the graph is excellent.

Something your audience may find interesting is that until the upcoming meeting in Manchester, the London meetings have always seen the highest number of registrations…

The first three were London meetings.. and then UKNOF started going to other parts of the UK. This is when you start seeing dips. Generally speaking, the pattern in the graph shows peaks every now and again in a group of meetings.. the peaks are always London meetings. Where you see a dip, it is likely to be a non-London meeting.

Around half way in UKNOF’s history so far (more specifically UKNOF13 in Sheffield, 5 years ago) is when we start seeing a significant rise in non-London meeting registrations, and their registration numbers hover around the same number in subsequent meetings .

This pattern of (steadily rising) London peaks and (hovering) non-London troughs continues until UKNOF26 after which point the upcoming non-London UKNOF27 meeting in Manchester breaks it and is so far the most registered meeting in the history of UKNOF and 2.5 times more than the highest number of non-London meetings.

A question in my mind… in addition to UKNOF being seen as an established forum for the industry, do the UKNOF27 registration figures also indicate significant interest and growth of the industry in that part of the country too? Is it to do with Manchester, or the North West, or the M62-ish corridor region in general?

There’s something weird about the link target for the UKNOF1 attendee list on this site – the text for the URL as displayed is correct, but what it links to is wrong – should be www not wiki and all lower case. All UKNOF content is open, you don’t need a login to view it. Or go to http://www.uknof.org.uk and click on the Attendee list or other links of interest there

Bit odd that Keith as I don’t see the wiki bit myself and it goes through to www for me. Ah well.