The O2 wallet is dead. It disappointed from the start. I put a tenner in to have a play and found that I couldn’t use my phone to pay for anything. It had a mobile app but all that did was provide a web interface for the phone. It wasn’t a contactless payment tool. To use it seemed just as elaborate as my normal internet banking service, so not particularly easy then.

It might have been an article on the BBC about a new contactless payment system, Zapp, that made me think of the O2 Wallet again. When the O2 Wallet was launched I thought I would be a trailblazer (I’m sure I wrote a post about it at the time but am blowed if I can find it). I would be able to use my phone to pay for things. I signed up and downloaded the android app. Good start.

I started small by sticking ten quid in my newly opened account. The tenner sat in the account for I know not how long (actually must have been 18 months because that’s how long O2 is saying the project lasted). I found it impossible to spend that cash, like I said.

I was disappointed but hey, it was an experiment that cost a tenner. Though it did occasionally drift into mind I forgot about the O2 Wallet. I pretty much wrote off the tenner.

Last night I logged in to my O2 Wallet account. The miracle was that I could remember my password. I was greeted with the message shown in the pic. 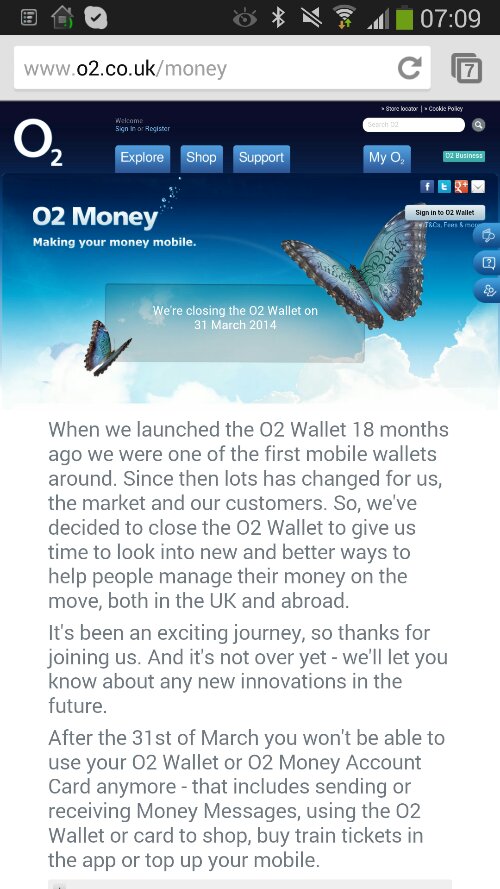 Following the instructions I withdrew my £10. Put it back into my bank account. Lost out on 18 months of current account interest at 0.75% but who cares (as he rolls another cigarette in a fifty pound note)(not really, I don’t smoke).

I noted with bemusement a message saying that the service was free at the moment but that charges would be introduced in future.

O2 will be closing my account in March. I will uninstall the app today.

The O2 Wallet is dead. May Zapp succeed where O2 did not. I hope it does. I have on occssion nipped out to the shops and left my wallet at home but I rarely forget my phone.

I hope Zapp is easy whilst remaining secure because it is the future of payment systems.

That’s all. Written in bed on my droid.

Footnote. I just uninstalled the O2 Wallet app and looked for Zapp in the play store. No sign of it!!! Hmm. Not a great start. 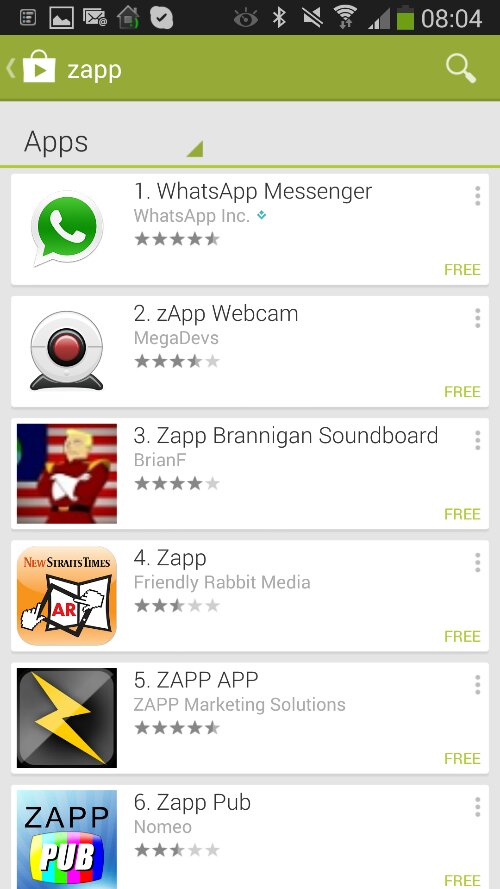 OK I found zapp.co.uk. I’ve registered to get information, for the first time using the new email address that I use to register for these things to avoid clogging up my main account with spam.

First observation is that Zapp are at pains to tell you it’s your bank who will provide the app and the service and not Zapp. Ok. Second observation is that I bank with Lloyds who I seem to recall are the largest retail bank in the UK (I might be wrong. I dunno) and that there is no mention of Lloyds, or Barclays for that matter on the site. HSBC and Santander are in.

I suppose that Zapp are “just warming up the market”. Getting us excited. They must clearly be chucking cash at the project to get coverage on primetime BBC Radio4 Today Programme.

I’m not sure I feel all that confident about their prospects. Lets hope I’m wrong.

Also I’ve just noticed their website says Zapp is due to launch in Autumn 2014. Blimmin eck. I can understand advertising the Olympics that far in advance but Zapp? Must be a slow news day. Hasn’t anyone died?

I really wish NFC payments *from smartphones* would get off the ground in the UK. My Galaxy Nexus has been NFC enabled since it was made I think over 2 years ago now? There were rumours of something being ready for the Olympics…that never happened.

The best we can seem to manage is a small NFC sticker from Barclaycard that attached to the back of your phone. with Adhesive. Come on!

I can’t use it because my phone tries to read it constantly. Even having my phone in the same pocket as my wallet causes the phone to go a bit nuts, sometimes.

I got the impression that the delay is because you have three factions fighting for control over the system;

I don’t really care too much who gets to control it so long as I get *something* that works.

I’d prefer it not to be the MNOs though. Putting a telecoms company in charge of money/billing/accounting systems is like putting a team of hungry kids in a chocolate factory and telling them not to eat the produce.

Quite agre Phil. Doesn’t look as if the MNOs are making headway at the mo – everyone is after ownership of the customer.

O2 haven’t had a lot of luck with finance stuff, O2 Money was axed and now the wallet had gone too.

Think in the UK at least they are not sure how to make money from NFC which is why they are dragging their feet.