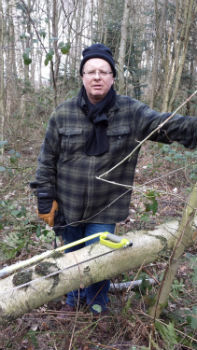 This weekend sees a lumberjack special on trefor.net. All internet and no sawing doesn’t light the fire.

Costs five or six quid for a net of logs from the local garage. We could get a ton delivered for around £80 though have only ever done it once. Kept meaning to order more. Cousin Steffan has a gleaning license from the local forestry commission allowing him to “harvest” fallen trees. After this winter’s storms there are plenty of them. On Saturday the trailer was hitched up and we set off for Osgoodby woods north of Market Rasen.

Bit of a tip. Thought I’d check the tyre pressures on the car before going. With an expected load of wood I figured it had better have the right amount of air in it. What I hadn’t thought of was the tyre pressure on the trailer. After I got back from the Tesco garage I looked at the trailer tyres and they looked a bit low. 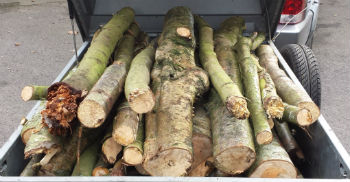 I also happened to notice Anne’s car had a puncture so I called the AA out. The AA man turned up promptly (50 mins), sorted the puncture and in exchange for a cup of tea did the air on the trailer tyres.

That trailer is 10 years old this year and in that time I’ve not topped up the air once. They were meant to be at 35psi. They were at 20psi! Good job we checked innit? 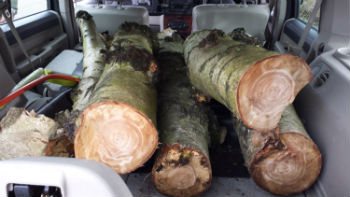 Now there are only two things you need to know about a gleaning license. The first is that you aren’t allowed to use mechanical tools to cut up the wood. The second is that you can’t take vehicles onto the land so everything you cut (by hand) has to be carried to the car at the edge of the wood.

This is quite sensible really as it limits the amount of wood you can take. It makes it very hard work.  That stuff is heavy and the floor of the wood is boggy and covered in brambles. 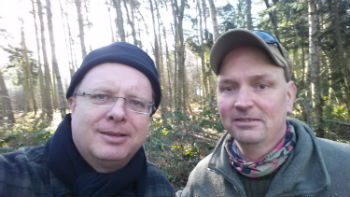 Steff used to be a forrester before a knee accident cut short his career. Having a professional in tow (though reality was he was towing me) was quite handy. He picked out the best wood, ie the stuff that had already dried out, and we set to with our saws.

Steff pointed out an interesting oak tree with what looked like two trunks. This tree was around hundred years old and be the 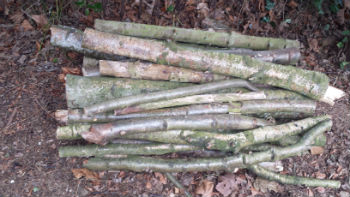 pollarded regrowth of one felled for pit props during the first world war. Innerestin

I’m going to let the photos and video tell you the rest. Bloody hard work mind you. We were at it for three hours and when we got back to the house ate half a baguette each!

The last pic is my share of the take from the afternoon’s work. The video is a video.