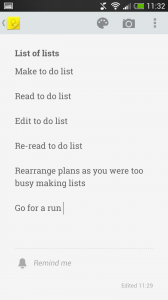 Bouncing while running – At least once during a run, but usually a lot more than once, I find myself wasting energy by pushing my direction of travel upwards rather than along. This should be the next progression in running apps. As well as calculating distance covered, heart rate and calories burnt, I’d really like to know the distance I’ve wasted vertically. It is unlikely that I will seek out a way of breaking this habit, as it really is a lot of fun.

Running faster near people in traffic, who are obviously taking the piss – They might not be, but I know I would be. ‘If its not hurting, its not working’ is a tedious phrase, and even more so because there’s an element of truth to it. This means your appearance is hilarious to those who are in a car, comfortable and listening to Ken Bruce. This also includes running past teenagers outside shops and workmen drinking tea.

Not Stretching – Opinions are divided on whether stretching before or after a run is necessary. Some suggest that stretching can actually be bad for you. I want to believe that stretching is good for you therefore, by not stretching, I’m breaking some kind of rule. A minor act of decent towards the kind of fit people who are 99% muscle.

Planning a route that involves train crossings – If I get to a train crossing and the barriers are down I should, of course, turn around and run back where I’ve run from until the one person in the East Midlands that can afford train travel has gone past, on seemingly, their own private train, then turn around again and continue on my way. Herein lies madness and more jeers from those trying to answer 3 in 10 hits by Belinda Carlisle on Pop Master. Stopping as I do however, really effects the flow and the momentum of a run, and even if I am too embarrassed to run around in circles, who could tell with such a red face already?

Running past the gym that has running machines facing the windows, throwing money behind me to illustrate their futility – I don’t do this, but I should.

I do have one very good habit – once I’ve crossed my finish line, I always congratulate myself. Actually verbally saying ‘well done’ to myself, out-loud. It feels good and I’d recommend it, although if you ever repeat that back to me, then you can expect consequences.

I notice that the telegraph also does lists to “top ten” or “ten best” things. This is basically a way of trying to keep punters on the site and increasing page impressions (= advertising money). I have on occasion taken a look at these lists but they are always very subjective and I find myself leaving the page with a slight feeling of disappointment.

Lists can be a good tool to focus the mind but not in a competitive way more of a necessity for people,like me, who may suffer from a condition I call ‘goldfish brain’ ie the inability to remember anything for more than 3 minutes.BUT when I’m exercising I find my brain is much sharper and more focused.

When running be smug and don’t worry about what anyone else is saying and thinking just concentrate on studying upright. Keep it going you’re doing brilliantly and most of all keep running with a smile on your face it confuses people……so I’ve been told by a very wise and beautiful lady

The garmin forerunner 620 will tell you the height you run off the ground and the time you foot remains on the ground each step. Good indicators of performance.

I promised Tref a review just the other day when we were discussing your running blogs.

I love this blog and really look forward to the next post each week!