Sat in the lounge on the IoM ferry Manannan. Using the free WiFi. In fact 5 out of 6 of the family are using the free WiFi and I’m using my droid and the Chromebook so that’s 6 devices. Most of us are listening to TalkSport – Liverpool v Man City. Crucial top of the table clash, must win game, the lads are up for it, etc etc etc

Just done a speedtest. 214ms ping to a Manx Telecom server in Douglas and about 150k down. Not surprising. The Davies family is probably single handedly using up all the connectivity. Looking around there aren’t that many people in the lounge and I can’t actually see anyone else using tinternet. 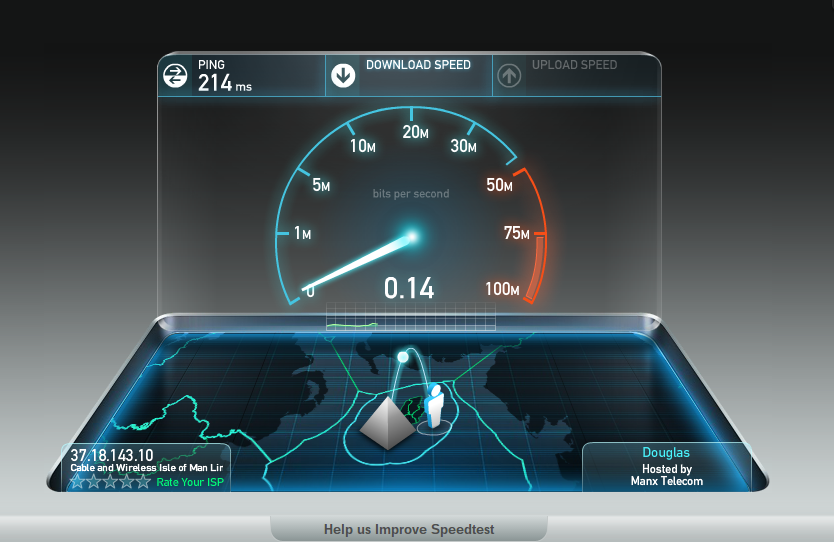 A bit later… the radio is buffering and I can’t seem to upload a photo to pixlr for editing. More people are settling into their gadgets, using up my bandwidth. Don’t they realise it’s making the experience pants for the rest of us. Selfish b$%^&*)$.

Outside the gale force 5 veering 6 is blowing white tops on the waves and it is a sunny afternoon on the high seas. The game is getting exciting – two all after Liverpool went two nil up early on. “The score is deliciously poised”, to quote one of the commentators.

The one thing the advent of gadgets has brought is easier travel. Everyone is quiet. It can be the same in the car – they all just hang off the MiFi (tx EE).

The boat is beginning to rock. It’s that “veering gale force 6”. I don’t typically get seasick though Kid3 does. They have all taken pills.

Liverpool have scored again. The family are Liverpool fans although tbh I’m Lincoln City (“till I die”) I’m happy to lend my voice to support the reds.

It’s a good job WordPress works offline on the Chromebook. Everything keeps buffering. You will have to wait until we get ashore for me to edit and post with a photo. Mind you the photo is of the speedtest and the conversation has moved on since then.  Maybe I’ll stick up a panoramic view of the ship leaving harbour instead. Far more scenic1.

A Vonage ad appears on the TV on the wall in front of me.

I may have to introduce a weekend sports section on the blog to supplement the travel.

Walk on, walk on with hope in your hearts…

PS Handy tip when catching IoM ferry: always pay to take a trailer with the car. They wave you on to a spot at the front of the car deck so that you are one of the first off the boat.

One reply on “IoM Ferry WiFi – the return journey”

Congratulations Tref, you’ve out geeked me. 🙂

When traveling I never have the urge to connect to the ‘net. I just sit back and enjoy the journey.