I will start with a question, and feel free to answer simply by raising your hand. Have any of you out there who have read this far ever felt a near-overwhelming bloodlust with regard to a PC, wanting to hoist it over your head and smash it at your feet (or, even better, on the pavement or sidewalk or other surface of sufficient unforgivingness many stories below an open window)? Or harbored visions of a cataclysmic reckoning descending upon the good folks at Microsoft who develop, market, and directly financially benefit from the Windows operating systems? Ever fantasize about the painful and public (oh-so-public) limb-from-limb rending of someone somewhere who in some way had nth degree of responsibilty for your facing the Blue Screen of Death?

OK. Hands down. Really, I was just asking rhetorical questions. Enthusiasm is always nice, though. And appreciated.

PCs running some flavor or other of Windows. Man. I distinctly recall entering that world back in 1993, and begrudgingly doing so…for money.

As a first-year technical writer just starting to dry off the space behind my ears, at the time I was working my first post-entry-level contract for Apple Sales and Support in Austin, working solo to document the company’s PowerBook Problem Resolution Process (really, it was called that)…for $10 an hour. I had visions — Heck, I had plans! — to save up enough dosh to take the following year off to live/work/travel in Europe, and yet in June of that year I was working a gig that was just managing to cover rent and gas. But it was Apple! PowerBook-era Apple! At-the-precipice-of-cratering Apple, but still Apple! And I felt comfortable and warm and safe in the Mac OS and that clanky Claris software (MacWrite! MacDraw!). For $10 an hour.

Around that time a programmer type with whom I had some acquaintance (and who really liked my cooking) told me that he could help me latch on at the Texas Education Agency for a great deal more than I was making at Apple. He didn’t quote numbers, but he was sure the rate would be at least double the amount of pennies I was yanking down at Apple. And the TEA offices were just down the street from my my digs at the time (small unshared detail up to this point: Apple’s Austin campus was out in the sticks), too. Government contract! Double the money! Wicked-short commute! One caveat, though…I would have to work in…Windows. 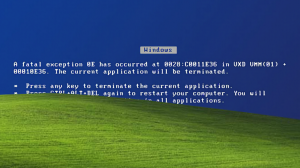 And so I instigated a personal sea change in my day-to-day. For a 150% income bump my cyber soul was bought and paid for. From The Beatles to the ‘Stones. And that is the way it was for the next 15 years, through the year I did end up spending in Europe (London Underground Limited, Safety Directorate, in 1994…a Windows shop), through career stints at Dell and IBM, the first Internet bubble, and the first 7 years of my freelance career. Windows this, Windows that, nothing but Windows (OK, a little Unix on the side, but that was just for fun and profit), and nary a thought paid to Apple and their Mac OS whatever-number. Was I “happy” in the Windows world? Did it matter? Being adept at Windows was essential for my work…necessary to ensure my income. Lucrative, baby!

Let’s get back to the bloodlust I led with at the start, which — Yes, heavens yes! — I have known all too well over the years. Mine is a vivid imagination that tends to run easily to the dark-so-dark and apocalyptic, and within the confines of my own mind I have creatively destroyed enough systems and viciously slain enough Microsofties (and some Dellites, too…the hardware makers have to take some of the hit) over the years to create mountains of broken computer components and a line of head-topped spears that could stretch from Paris to London. Through corrupt driver installs to virus infections to system crashes to hard drive decimations and various other meltdowns (you name it, I’ve been there…and likely so have you), from 1993 until 2008 I fantasized committing despicable acts on hardware and high-tech personnel on a scale worthy of its own TV series (though, basically, I know I am thought to be quite a nice guy, and deservedly so).

So what served to end my virtual reign of terror in 2008? Did the skies open up and reveal that all was good in the world and would be from that moment on and forever? Well, no. 2008 was the year, though, that I sheepishly and with more than a little mad-eyed giddiness made my way back to Apple and OS X, which quelled my rage…for a time.

And thus endeth Part I.

One reply on “Apocalypse Then”

I await part 2 with bated breath, my perspective being given from the top of mount chromebook.