Recently, I was part of a very interesting discussion on TechQT about funding broadband, particularly for areas where there has been (or where it is perceived that there will be) a level of failure in the superfast roll-out.

Whilst many will argue that both the commercial deployment and that associated with the BDUK funding are still ‘in progress’ (and, hence, this discussion could be deemed to be premature), it is already becoming clear that there will be a shortfall not only in coverage percentages and the tech being used (FTTC or worse, instead of full-blown, full-fat FTTH or FTTP),  but also in availability even where the area has been deemed covered.

The truth is that exactly what happened with ADSL is going to happen again. Despite proclamations that some 97% of the country had broadband last time around (2003/4 onwards), once it became obvious that this was a lie gummint had to step up to the mark and get on the case, which they endeavoured to do with BDUK.

Obviously, the government has committed a fairly substantial quantity of yours and my dosh to resolving this issue of critical economic and social importance to the UK. We tallied up during the discussion and estimated that it came to around £1.9billion in total, which is hardly small change. There are, however, already more than a few squeaks coming from both the country mice and the town mice highlighting the fact that even upgraded and new cabinets are not delivering the solutions required, and pushing the fact that far too little FTTH is being deployed.

The likelihood is (put a note in your diary for 2017) that AGAIN more funding will need to be found to rectify what can only really be seen as a right royal mess. Whatever happened to “Do it once and do it right?”

So as it is obvious that there will need to be yet further money spent in the not too distant future, we talked on TechQT about the alternative funding sources for all those areas that are not covered, and the fact that investors are seeing the UK as a largely untapped broadband market. These funding options range from the new Broadway Partners investment fund, municipal bonds, liens on houses (i.e., extend your mortgage), tech investors, community money, infrastructure funds, planning gain (for example, from wind farms),  and more. (Watch the show, I don’t want to transcribe the entire thing!). We were all wholeheartedly in agreement that grant funding is far too painful, and expensive.

The main conclusion we reached is that for any community or business dissatisfied with the progress (or lack of) in their area, there are multiple financial options to JFDI yourself or to attract a company that can resolve the problem. The key obstacle is not then, as frequently touted, coming up with money to fund solutions. There are obviously hurdles — potential lack of local authority support, aggressive take-down tactics by the incumbent, plus the natural pain of trying to design and build a network – but these should not prevent forward progress in ensuring Britain actually achieves true, competitive, future-proofed broadband. 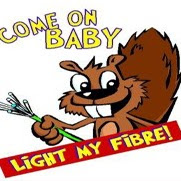 Perhaps not everybody is (yet) aware of the “co-operation” between SCC and BT to destroy our SEEDA-approved RDPE grant for Ewhurst awarded in December 2010. Most public servants took BT’s word that they would deploy their inferior FTTC solution in Ewhurst to mean a like-for-like solution would be provided (significantly delayed) by BT. The reality is they only installed ECI 128 cabinets with a single 64 port card and only a 100 pair tie cable set. One cabinet lost availability last July and was only restored around February this year. Yes we’ve had storms so cables were broken and poorly repaired. Now we have a 20 pair cable refused any new VDSL services even though some have obtained up to 19 Mbps on it. I interpret that as meaning that BT can’t afford to maintain the cable at a sufficient standard to support VDSL services so is now denying its availability just on that cable.

Can the nation afford to allow this execrable behaviour to continue, or should punitive damages be extracted ? What a splendid way to generate the investment for others to install FTTH !

Which is what I’m doing here in Hants. I’m just flippin doing it. And reaching parts that other telcos, funded by BDUK, fear to tread…

we have a similar JFDI project going on here in NE Somerset. I’d like to link up with you – how can I contact you?