Marcadet-Poissonniers (both the M4 and the M12 make stops at the station, and I am on the former) is my hopping on point today, as it is the vast majority of times I make use of the Paris Metro, seeing as how the entrance is less than 50 meters from the Chez Kessel doorstep. Yet another stunning blue-sky spring day this mid-May Monday (ay-ay-ay), Paris really has been peacocking over the past week, splaying every one of her luminous feathers to maximum extension and effect. Not why we are here, though, to expound on the picturesque, so I’ll put the wanna-be poet back in his box and instead get wet with tech.

As people moving technology goes, RATP (Régie Autonome des Transports Parisiens) is at something of a crossroads. Still so much an analogue experience, the digital has been oozing in around the edges of Paris mass transit for some time, and recently it seems to have somewhat stepped up its game. For instance, whereas for literally decades the best a bus commuter could hope for regarding information on when the next bus might arrive at a particular stop was a posted published schedule, today Paris’s bus stops all offer updated electronic signs that indicate not only when the next bus will be stopping by but the next one after as well. And though this has been the norm in parts of the Metro for some time, the proliferation of such signage down there has markedly increased in recent years to now include every station (Kory Coming Clean: I did not travel to all of Paris’s 303 Metro stations to confirm ‘all’, but I do not recall the last time I stood waiting on a train platform lacking for the needed info). Still better than that, though, are the very new signs seen at Metro exits that indicate not only the bus lines that stop on the surface nearby, but also the number of minutes until the next bus on each of those lines will be arriving! 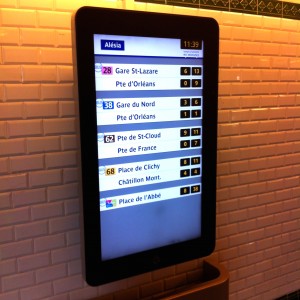 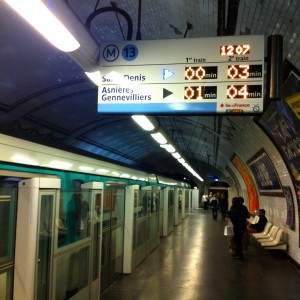 It’s all about synergy, baby! Well, that, and computers, databases, sensors, reporting software, and other such technological schrecktose that dates post-1975. That said, in spite of the obvious expenditures RATP HAS made in bringing their equipment up-to-near-date, It is hard not to shake one’s head in astonishment at their inability to configure the Paris transit system to issue individual tickets that can be used for hybrid journeys involving both train and bus. I think these days that ability is even available with the London Underground!*

Getting back to the good…it isn’t just in tightening up scheduling and setting rider expectation that RATP is shaking off its cobwebs. Advertising has been making up the funding wasteland between fare intake and level of service since the dawn of the Paris transit system (or, at least since it’s mid-morning), and after what seemed a prolonged tentative start — a video billboard looming above the throngs at the massive station art La Defense, another just like it at Gare Montparnasse — video advertising is now copiously deployed in the Paris Metro (though not at platform level, as far as I have seen thus far…perhaps it is considered too distracting for rolling stock operators, delicate flowers that they are). Such animated selling imagery is also making its way to the bus stops, though at a somewhat slower rate. Of course, about half of you out there reading (you five, over there) are no doubt thinking, “Advertising? Well, what the is “good” about THAT?”, and you aren’t wrong in asking the question. Fact is, though, that if you make the safe assumption that advertising is a basic fact of the mass transit experience and just accept it as a necessary evil not worth the time to negatively comment on (yes, I am cackling a bit as I type that), isn’t it far better to have ads in the mix that actively stimulate the eye and ear rather than just a homogenous hodge-podge of passive lay-flat half-messages? Discuss amongst yourselves.

Now don’t make the mistake of thinking Paris mass transit is on the cusp of its “Blade Runner” moment. Oh no. I already cited the inexplicable inability of the train-punched tickets to talk to the buses and vice-versa. And as for ticket purchase? Well, although I am all for designing public-facing systems that (1) are easy to use at the so-called lowest-common-denominator level (shame that LCD as an acronym is so ubiquitous), and (2) can stand up to near-constant every-single-day-into-perpetuity use by all denominators common and otherwise, the self-ticketing “computer” systems are about thisclose to insulting. If nothing else, someone with the ability to wrap their minds around basic interactive system design should be tasked with shunting the current system into a “wrapper” that allows for quick-purchase options at the top level. And then there is the tech deployed at the invisible plane, such as cellular coverage below ground. On the M4 I can get 3G coverage…sometimes, whereas on the 12 such service is a fantasy of the highest order (and that only describes the trains with which I have the strongest association). Coverage uniformity, thy name be not RATP!

OK. Taking a breath. I came to praise, and in truth the effort to do so with regard to Paris transit is lesser than that needed to whinge. And it must be said, at €1.70 per ticket — £1.38 — the cost of getting around town makes any effort to whinge feel petty, indeed…this in comparison to London Underground which soaks the single ticket buyer for £4.70 (€5.78)!

Rooted hard in the romance of an age (hobbled?) — heck, the entire system is considered a landmark, with much of the requisite “Never Change” burden that comes with that — the Paris Metro and bus system of today is making steady, definitive (baby) steps in its use of the technology of this current age.

* Research to follow, and this week at that, so check back for updates, fearless reader.