My son Tom is currently editing the next broadbandrating.com video. You will have to wait and see what it is all about but if follows on from last week’s pig racing (if you haven’t seen that vid click on the link – it’s very good). The next vid is taking a while because there was lots of footage that included kids faces. Tom, having been on the BBC’s political correctness course, is blurring out the faces one frame at a time!

Anne and I were in London over the weekend. There was a big cycling event going on – thousands of cyclists pedalling around St James’ Park, down The Mall, around Trafalgar Square etc etc. It was a bit of a stop start affair – lots of tourists trying to do the usual touristy stuff – being fleeced by ice cream vendors, buying cheapo tat at top dollar, you know the kind of thing. Oh and crossing the roads which necessarily involved frequent stops to the cycling.

I took a few photos. That’s what made me think about the global village thing. That and the extreme busyness of central London. The time is not very far off where I’ll be able to scan the internet for images of the people in my photos and find out who they are. In fact I can do it now to some extent – searching for similar images. The natural extension of this is real time video streaming from my Google Glass or other wearable device and in real time telling me who it is I am looking at. LinkedIn profile, Facebook profile, the lot. Our security forces probably already do this.

The consequences are a bit obvious. If I were to stand videoing the cycle ride for an hour or so I’d capture images of each rider’s face and subsequently be able to identify everybody who took part, including children.

There are many obvious uses to this application, all bad as far as I can see. One simple one is that advertisers could identify people who liked cycling and push them as for bikes, hemlets etc etc.

As the owner of broadbandrating.com, a site that makes its money by attracting visitors specifically interested in broadband I am keen on the idea of having new ways of targeting prospective customers to the site.

As a prospective punter I am less keen. I’ve decided I don’t like seeing ads eerily pushed to me on subjects that I am interested in. As often as not they are too late anyway – I’ve normally already gone and booked the hotel room etc. It makes me think that “they” know too much about me.

I realise this has big implications to the business model of the internet but I’m sorry, that’s what I’ve decided:).

There is another angle to this whole subject. In the good old days (where the average life expectancy was 40 and people lived as serfs in villages working from dawn until dusk for their master and died of cholera, typhoid, rickets, polio etc etc – you know, the good old days) we all lived in villages and every one knew everyone else.

Nowadays there are 7 billion or more of us on the planet and a big chunk of us live out our sad anonymous lives in large urban conurbations where don’t talk to our neighbours. There are in any case far too many people to be able to remember their names.

This will not be a problem in the future. With our new technology we will know who everyone is. People will start talking to others. “Hello Mr Williams/Gladys/Sanjay” you will be able to cheerily say to the neighbour down the corridor as you pass them coming back from Tesco. 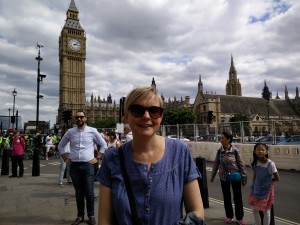 Maybe, maybe not. I’ll leave it to you to decide.

I’ll finish with a scene from our weekend in London. I’m taking a picture of my lovely wife Anne with the Houses of Parliament in the background.

Coincidentally someone else is doing the same thing. It looks almost as if the guy is photo-bombing our shot. 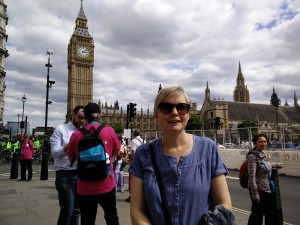 Actually from the second photo you can see that he was having his own photo taken.

I have no idea who he is but if someone can tell me his name I’ll buy them a beer. The technology is out there…