New Zealand based ISP Slingshot is providing pre-VPNed connections so that New Zealanders can watch BBC iPlayer or subscribe to Netflix etc for free. A VPN, or Virtual Private Network in this case allows users to tunnel across the internet so that it looks as if they are located somewhere else. Effectively corporate promoted broadband internet copyright infringement.

BBC programmes are made available to UK license payers on computers tablets and smart phones via iPlayer streamed over the internet. iPlayer is blocked from streaming to non-UK IP addresses on the basis that they are unlikely to be genuine UK residents and thus will probably not have paid their license fee.

Netflix is a paid service but not available in every country around the globe. New Zealand based subscribers wanting to sign up have to lie about where they live. Slingshot provides the IP spoofing, presumably via a proxy based in the UK which can then also be used to access iPlayer.

From a Netflix perspective the issue is likely to be the fact that Netflix themselves may not have the licenses to stream certain content in markets other than those in which they operate.

As a UK BBC license payer I am of course outraged that I am effectively susbsidizing the TV watching of New Zealanders. I can’t see how they have time anyway. One assumes that most of them are out playing rugby  every night.

It’s interesting as this sort of thing is probably legal in NZ. Slingshot takes no responsibility for the fact that customers may have told Netflix porkies about where they live.  It’s the way of the world of course. The internet doesn’t care (much) for national borders, unless you live somewhere the government is trying to control what you access…

Internet crime came closer to home today with the kidnapping of one of the Timico NetOps  team’s key players, the Pirate Duck.

Criminal sophistication has reached new heights with this case.  The gang responsible for the crime has set up a web page, www.wheresmyduck.com,  so that distraught owner, engineer Ian P. Christian, can reassure himself that his duck is as yet unharmed and being looked after.

Efforts to track down the owner of the domain name have been fruitless as the “Who Is” function for that domain has cunningly been disabled.  No ransom demands have been received as yet but Ian is standing by his PC anxious to hear more news.

Ian is fairly phlegmatic about this incident. “He was after all a pirate duck and he who lives by the sword…”

The victim’s twin brother is pictured below.  Any information leading to the safe retrieval of the duck will be gratefully received. The incident is being dealt with privately and the Meteropolitan Police eCrime Unit has not yet been called in.  If you want to show your support for this cause you should join the Facebook group “Save The Pirate Duck” 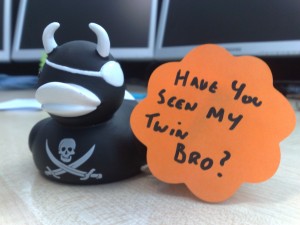