Travel to and from the games: – a joy – the train to Cardiff was standing room only but we had booked seats – no problem. I travelled back in first class early the next morning with the lad so don’t know how the people up the back were. Most of the fans from the previous night will have either gone

back that night or still be in bed sleeping off the beer. For the record the lad had two hot chocolates, a diet coke, a Fanta, a packet of hand cut crisps and a croissant – taking advantage of the free food and drink up the front.

At Kings Cross I noted no queues at taxi ranks.  Easier by and large than a normal day in town.

Connections in London to get to Lee Valley for the kayaking – trouble free and swift with plenty of seating. We sat in first class between Tottenham Hale and Cheshunt despite not having the right ticket – you know I’m a reb. Nobody checked the tickets in either direction anway.

On the way back we joined the 12,000 spectators emptying out of the venue for the 30 minute walk to the station. At the station we got on a train straight away and were whisked away within 30 seconds – unbelievable. In fact almost every connection we had to make had a minimal wait. The train was full but hey… 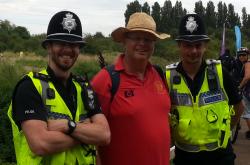 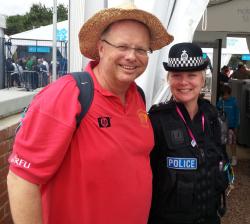 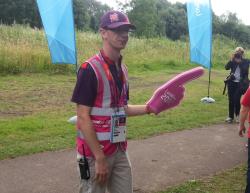 Security at the games – reassuring without causing lengthy delays. The coppers were very friendly and happy to indulge tourist Tref with photo calls. The women PCs smiled beautifully (steady Tref). The presence of armed police showed the underlying serious approach to security.

The pointers too were very friendly and efficient. The numbers of staff on hand to help was overkill but you didn’t feel that. They were great and all out to enjoy the occasion.

The presence of the military was also comforting. The troops approached their last minute call up with professionalism and I have to say we all felt that much safer with them around. They looked confident in everything they did &  also had a special Olympic cloth badge (fwiw:)

Other logistics – the number of portable toilets stood out – I don’t think I ever say anyone queuing to go to the loo – got to be a result.

We arrived at the Lee Valley venue at lunchtime which consequentially meant huge queues for the food concessions. Because of this we waited until one of the breaks in the sport and were able to buy food with very little wait. £9.5 for fish chips and mushy peas if that’s your fancy. A sausage bap and a diet coke were around seven quid. Good quality nosh but v expensive. One man handed over more than fifty pounds to feed his group.

Connectivity – as in the Millennium Stadium I didn’t get on with the WiFi but didn’t need to because the 3G was good – 3.8Megs down and 1Meg up. WordPress for Android with a few photos didn’t work very well. Admittedly one was a panorama shot which seems to mess it up. This post was originally written at Lee Valley but I’ve had to retype it on the laptop at home.

I’m back at the Olympics next week and will try and take advantage of the WiFi at that time and report back.