The Alliance Against IP Theft held a meeting yesterday at Westminster Hall in The House of Commons.  Present were 5 speakers from the creative industries – from Fulham FC, Universal Music, a freelance writer and journalist, a publisher from Random House and a construction manager at a film studio – and a panel of MPs including Tom Watson, John Whittingdale, Kerry McCarthy, Lord Corbett and Steven Pound. The meeting was chaired by Janet Anderson who leads the All Party IP Group.

Each speaker gave a talk on how piracy was having a negative impact on things like investing in new talent.  The MPs then asked a series of questions.

Mr Watson also questioned the figures that rights holders produced that suggested that every unlawful download was a lost sale. The panel agreed with him when he said that the creative industries had never been in a healthier state in terms of popularity, despite filesharing.

Lord Corbett gave an indication of how the Bill will progress through the Lords – it will receive its Second Reading next Wednesday December 2nd and is likely to leave the Lords and enter the Commons by the end of January. With a two week half term break in February, it was suggested that as Parliament is rumoured to be dissolved at the end of March for the general election, there was a good chance that the Bill will run out of time.

This is clearly an important phase where lobbying for and against this Bill is going on.  It is the first time I have been involved at such close quarters in something so important – one that is generating high emotion from both sides. The strange reality is that I doubt that there is a single person who is against the proposed regulation on P2P filesharing who actually supports the illegal activity.  It is just that they don’t think this regulation is the right way to go about it.

Also I’m not a particularly political person but it does strike me that we should now just get on with a General Election because we are now entering a silly season where there is a danger that Laws will be rushed in without properly being thought through. Of course I know politics doesn’t work like that…

The Communications Market Report published by Ofcom yesterday has thrown up some interesting stats in subject areas regularly commented on in this blog.

For example Ofcom says that there is an overall reduction in the number of people downloading music and videos.  This overall decrease is only 1% but the number is marked in certain age groups.  15 – 24 year olds are downloading 8% fewer files and the maturer 25 – 44 age group is at it 5% less.

Now there is nothing to say that all these downloads are against the law but this must surely point to an overall reduction in illegal P2P filesharing which must in large part be down to all the high profile activity in this space of Feargal Sharkey and UK music. Any comment Feargal?

There is an awful lot of work left to be done in this area and it is going to be the subject of discussion for some years to come.  Ofcom’s chart purloined below – click twice to get a better res view. 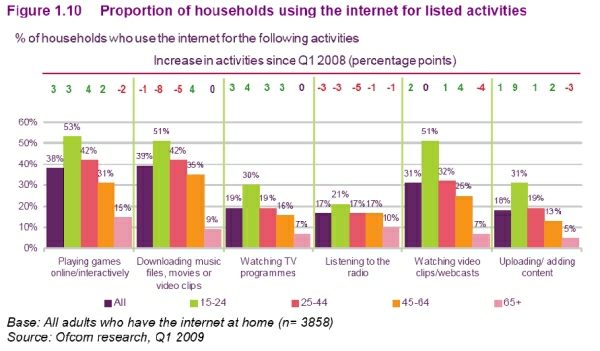 Note downloading has increased amongst older folks. One imagines this age group is less likelyto illegally fileshare. Also note increase in uploading content.  This is going to be a driver for Next Gen broadband as currently being rolled out by Virgin and trialled by BT.