Discovered My Data Manager this week thanks to Rob 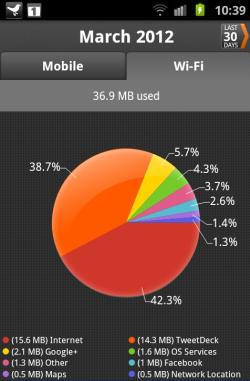 Bamforth of Quocirca. It’s a wonderful little app that lets you see how much data each app uses on your smartphone (I must stop calling it that – it’s so 2011).

I have only been using it since Tuesday when I was out of the office for a couple of days. It may be seen that in that time I notched up 46.3MB of mobile data usage and 36.9MB of wifi. You can see for yourself what I was using it for – I am a very connected person or addicted to Twitter – you decide.

Other than being a reflection of social habits and mobile usage the data does suggest that in a month I am likely to use around 480MB which is just under the threshold of 500MB typically used by mobile networks for “fair usage”.

I don’t believe it. I’m sure I use far more than that though it is divided between the iPad and the mobile. I’ll see what the number for the whole month looks like and report back. 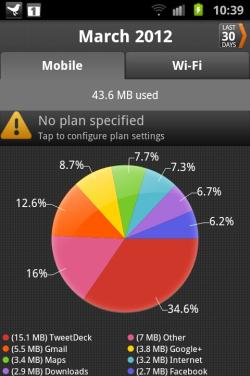 It would also be interesting to hear from others what their usage profile is (without giving away any secrets! )

The rest of this post is just a bit of fill in so that the text finishes off roughly in line with the bottom of the picture on the right.

Anyone else wishing to engage in polite conversation, inanities and observations regarding the rugby internationals coming up this weekend should do so through the usual channels.

I’m off to see Wales v Italy in Cardiff. Look out for me on the TV. Taking one of the kids. It was his idea.

There are still tickets available – not surprising at £75 high up in the corner!! I would also like to remind those who still owe me for bets on the England v Wales match it’s about time they paid up 🙂

Jfyi I am moving operations from the HTC Desire HD to a Samsung Galaxy S2 (I’m just so with it!). This is going to generate a blog post over the next few days because in my mind this should be a straightforward migration but I’m finding this is not totally the case.  I am also coming across User Interface differences that in themselves are not major but are interesting in that they show that there is definitely some differentiation in this market other than just processor speed, pixel count and battery life.

I’m sure that the Apple fanbois out there will snort in contempt at such issues but all I can say is their blissful state of “Jobs dependence” comes at a price that many are not prepared to pay. More anon 🙂