There comes a time on a Friday afternoon where a man’s thoughts turn to the Bank Holiday ahead. This weekend I am off on stag weekend in London taking in the Premiership Rugby Final between Leicester & Northampton followed by the England v Barbarians match on Sunday. No doubt we will also take advantage of being in London to pursue some cultural activities the details of which have yet to be disseminated to the travelling party.

In the meantime I have been given permission to show you a video. It has nothing to do with the stag weekend although there is a fleeting bit of rugby action near the beginning.

The video has been produced by the heir to the Davies title (currently 2nd in line seeing as my dad is still going strong and I am still around obv) in between taking his final exams at Warwick University and is an advertisement for the end of term celebrations. It stars Aaron Bowater who was the joke candidate in the elections for the Warwick Students Union President. During the elections my son, Tom, produced a number of promotional videos that received over 40,000 views on YouTube. This one is well worth watching.

Just got back from the Lincolnshire Show. It’s 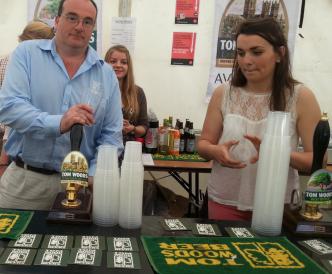 a great day out with the family. I’ve got a lot to talk about but in the interest of getting a post out today I offer a short one with a wood based theme. The sticks in the header are actually biros – I thought it was a good photo and I bought one for my mate Jamie whose birthday party I am going to on Saturday.

The inset photo is of a pint of Tom Wood beer being pulled. Tom Wood is a local Lincolnshire brewery. Excellent stuff. They were also selling Piper’s crisps, another local product.

My diary is rammed tomorrow so look out for a post on tractors on Friday. You know it makes sense.