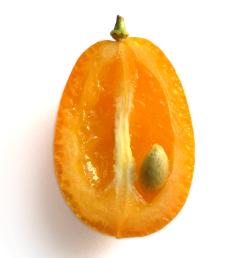 The announcement has been greeted with some surprise by the company’s huge global fanbase but most have readily accepted the move based on subliminal preconditioning when using their i-gadgets over the past month.

The only real source of dismay has been in China where pirate manufacturers are rapidly having to change their branding with some having produced designs using an orange which is of course an understandable mistake.

Posh supermarket chain Waitrose has greeted the news with delight. A spokesman told this blog that they had stocked up on extra kumquats at the expense of  space normally used for Granny Smiths and Golden Delicious and have announced a special introductory offer of a 200% price hike (they can bog off) before the price settles at 300% of normal RRP.

Other supermarkets were unavailable to comment as Waitrose have bought up all the stocks and the manufacturing lead times are 12 months. Retail giant Tesco is rumoured to be preparing a campaign based around the satsuma under its “Value” brand. Market research suggests that this could be a gamble as the prevalence of too many pips in the satsuma has been known to put consumers off though a slightly earlier than usual start to its Christmas sales campaign might be an option.

My bet is that the Kumquat will be easier to peel than the satsuma which will make all the difference in a market where consumers have been known to shy away from a personal communication product “just because it isn’t white”.

In a final comment Cook was heard to say “anyone objecting to this change is just full of sour grapes”. Well they had better get used to the taste of Kumquat.

1 Or at least after the pubs shut

2 If anyone from the USA is reading this just for clarification and for the avoidance of litigation it wasn’t Tim Cook that said this, yawl.

4 replies on “Apple to rebrand as Kumquat”

Are Yawl okay over there? Kinda sounds to me Tref as if whatever fruit juice you had for breakfast this morning has fermented and taken its toll!

Just for fun, I have forwarded your blog post onto Tim Cook.

Yawl have a good day