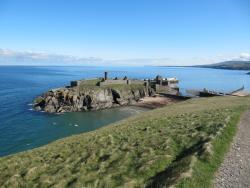 This has been a typical week in April in the British Isles. Sunshine and showers. Bathed in sunshine Peel is a lovely place to stroll around. I have been up at around 6am every day to go down to my favourite spot on Fenella Beach. It’s rare to see anyone else around at that time of day, except maybe the odd fisherman.

Although I have a rule to stay away from the likes of Twitter the holiday has not been without connectivity. There is wifi at mam and dads. 11.8Megs down despite the exchange being 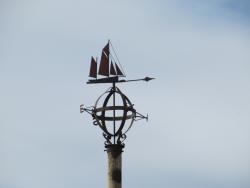 Mam and dad don’t really care – as long as the Guardian loads up in a timely manner. I have principally been using it to catch up on the local weather forecast. Also gmail – I’m speaking at a meeting at the LSE next Thursday so kept in touch with the organisation of that. Olympic news emails are also welcome – we have tickets for the kayaking. Work email has been left alone. My phone has been left mostly in the car. I don’t like to use it due to the cost of data roaming. 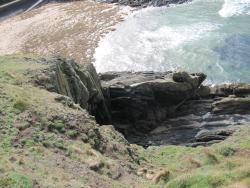 We had to reboot the router one day. Pretty much all the Davies complained to my Dad that they couldn’t pick up the wifi/internet. His laptop still worked fine so he didn’t care 🙂 Neither did I. Internet! Who needs it 🙂

The main story of the week in respect of connectivity is my discovery in the ships chandlery at Peel of a laminated map showing the line of the undersea telecommunications cable between the UK and Ireland – near Blackpool to near Dublin. 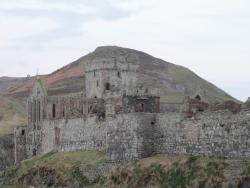 It was free so I took a copy – you never know when these things are going to come in handy.

The chandlery is down on the quayside near the museum if you happen to be in Peel and need some spares for your seagoing vessel. You don’t have to be a sailor to appreciate it. I was sorely tempted to buy some block and tackle gear. Only problem is I don’t have a use for it other than it is really cool gear to have. I doubt that Mrs Davies would entertain having it on the wall above the fireplace.

You will otherwise be pleased to know that we ate well and slept well and fully recharged the batteries in the fresh Manx sea air. Hooray for holidays. The short amateur video below is of Fenella Beach  – one of my favourite places.