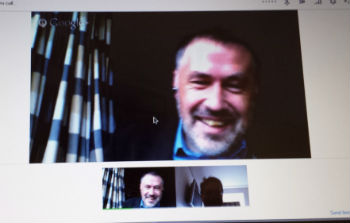 Just had a very pleasant 54 minutes video call with Sweyn Hunter using Google+ Hangout. My Huaweii 4G MiFi (courtesy of EE) tells me that it used approximately 315MB of bandwidth – probably slightly less as I did some emails before hand.

At Sweyn’s end he had “good old fashioned BT ADSL” with maybe 512k uplink speed. He lives in Orkney. The video quality was great though it did freeze two or three times in the 54 minutes. The only slight issue was an element of half duplex/one way speech in that if he was speaking and I tried to speak at the same time. I quickly got used to that and it didn’t detract  from the quality of the conversation.

Also 54 minutes was a long hangout for what was just a casual chat – I’ve never met Sweyn but converse with him from time to time on Twitter – @sweynh – I’m sure he won’t mind me telling everyone. The point being that if we were comfortable having a 54 minute video conversation the quality must have been good – otherwise we would have cut it short.

Sweyn is an interesting bloke I’m sure he won’t mind me saying – you should follow him. He is organising an Island Govcamp in Orkney next year on 6th and 7th September.

Might try a hangout using O2 and Vodafone sims in my various phones next time. It will be interesting to see if personal video calling is going to at last get mainstream with 4G. Bandwidth cost is still going to be an issue. You can work out for yourselves how quickly you will eat up your own data bundle.

It was great to chat with you, Trefor! I certainly don’t mind being described as interesting, not by you anyway 😉 The half-duplex/one-way speech thing is very common, in my experience (which, due to the absence in Orkney of anything much better than good old fashioned BT ADSL, is rarely better than during our conversation today), and is usually much less of an issue if everyone is wearing a headset, or if all mics except one or 2 are muted (I think there is something to do with re-broadcast of sound from open speakers going on).

IslandGovCamp in Orkney on 6-7 September 2014 will be accessible to all by digital means (principally audio and/or video livestreaming, with twitter interaction), just like the previous IslandGovCamp in 2012 attempted to be, and now we know that 4G (where available) would be an option for remote attendance! For anyone wishing to travel to Orkney to attend the event in person – which will cost an awful lot more than a few hours of interactive video over 4G, whatever the tariff (see http://visitorkney.com for options !!) – I should mention that IslandGovCamp will take place within the week of the Orkney International Science Festival ( http://oisf.org ) Thu 4 September – Wed 10 September 2014. I should also admit that there is a zero percent realistic chance of seeing puffins in Orkney at that time of year!

(PS: I doubt that anyone who knows me will be surprised that our chat was longer rather than shorter!!)

I was just using the mic & speakers on the chromebook. No headset.

That would be a third of the daily allowance for a satellite wouldn’t it? what is the latest allowance?
How much did that call cost you then?
Agree with what you said about Sweyn, he does some great bambuser streams showing life on the island. I attended his govcamp virtually last year, it was brilliant. Highly recommended.
chris

Fortunately for me I used a Huaweii MiFi that is a loaner from EE so it didn’t cost anything. Looking at their website they have various bundles but if we ignore the fact that each one has unlimited calls and texts then a gig works out at roughly £4.50. So my call would have been about £1.50 which I’d say isn’t at all bad for a one hour ish mobile video call.

I would say that is pretty reasonable! When I use my mifi in the rare places I can get 3G it is £10 a month with 1 gig of data. That’s with Three. With no phone calls or texts, its just a data package.