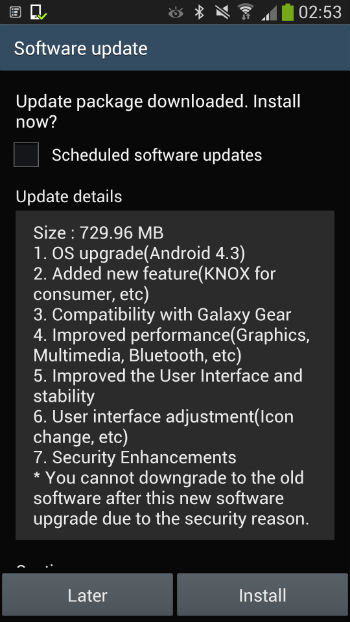 One reply on “I dreamt last night I was upgrading to Android 4.3”

I vaguely recall in hte past writing (possibly as a comment on this very blog) that it seems like there’s almost a conspiracy among Consumer Electronics manufacturers to produce updates that make products slower over time, to incentivise people to buy new products.

Otherwise, they’d never sell any new ones and they’d all go out of business.

I remember when my HTC Desire running old Android 2.1 was the fastest most amazing phone I’d ever seen.
Over 2 years it became the slowest and most useless piece of junk I’ve ever had. Some of that may be down to wear of the flash cells, slowing down the OS from failed i/o operations, which has been attributed to smartphone slowdown but it can’;t be that alone – it’s the software updates, surely?

Everytime you get a big software update for phones people rush to download it as they’re promised more feature, for free, and ‘performance enhancements’ – but this never seems to pan out.

You’ve found, as have countless others, that the new updates just make things run more slowly.

And over time things get worse and 2 years from now you’ll write off that old SGS4 as a PoS old brick, throw it away and get something new and fast.

It’s intriguing how this contrasts to the PC experience where machines appearing to get slower over time is a long established phenomenon and people are quite keen to keep Older Operating Systems on their PCs as there is (at least in the case of windows) a strong distrust of the newest version of the O/S, quite the opposite from smartphone land.

My phone (an ageing Samsung Galaxy Nexus that used to be just about the best phone you could get, for a short while) is feeling very slow now.

My Wife recently updated her Nexus 4 to KitKat too. Didn’t really add anything…feels a bit slower.