Night on the tiles last night. Dinner with Julian Huppert at the National Liberal Club followed by cocktails at London’s oldest cocktail bar – the American Bar at the Savoy Hotel.

I was thinking of using the American Bar for last year’s Xmas bash. Ended up not doing so because the capacity was only 78 persons, you couldn’t book it and a cocktail was around fifteen quid a go.

I’ve only been there once before. That was after my first year in Uni in 1981. Out on the town with my London based cousins we passed the Savoy and popped in for a swift one. It was very swift. Two halves of lager and a bourbon were £4.50. This was when a pint in my local was forty pence!

Last night seven drinks came to around £95 or £13.50 a go. That’s 33 years worth of inflation for you! Julian wasn’t with us by then. He’d gone back to do his emails. That’s how Internet Heroes roll!

I did my emails at 2.20am when I got in from the Phoenix Artist Club. I only know because I saw this morning that I’d sent one at that time. Always worth checking what you wrote the next day when that happens.

Photo below is me and Terry Mackown, one of RaspberryPi design team at the American Bar in the Savoy Hotel. 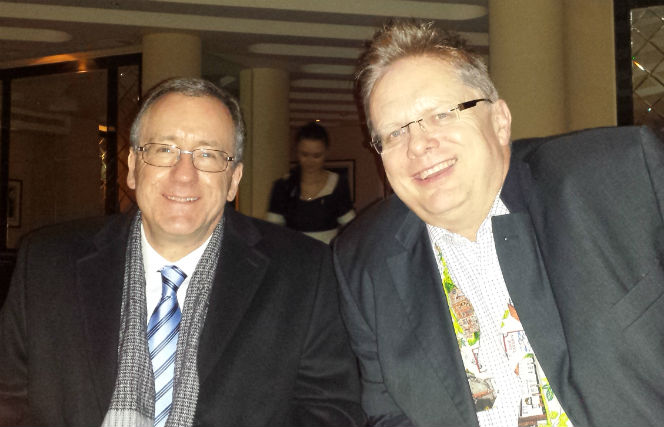 Btw we did spot a glaring gap in the market in central London that someone might want to address. There is nowhere at 2am where you can get a chips and curry sauce. There is the odd kebab shop but that just ain’t the same.

Correction the Rev Kennard tells me the 7 drinks were £115!