I was sat one Friday night in the packed snug of the Victoria pub1 on Union Road and the conversation somehow came to the subject of allotments. Turned out pretty much everyone in the room had an allotment! It may be that real ale pubs attract a certain type. I doubt the same would have been true for Walkabout or any of the other trendy pubs in town.

We gave up our allotment a few years ago. It was handily placed just over our back fence but it at 60m x 10m it was too big and with four kids could never find the time to work it. The plot has now been spit in two and is properly tended to as it rightfully deserves.

This morning I was up early to set kid4 off on his travels to Sutton Bridge for a hockey tournament (90mins drive away) followed by a football match this pm in Burgh Le Marsh (also a long distance). At 7.30 am the scene outside the landing window was almost autumnal. There had been a lot of rain overnight but with the deciduous trees overhanging the garden not yet in leaf one sensed an absence of spring freshness that makes this the best of seasons.

Over in the allotments a couple of people were already up and at it. Wow. That is commitment. They will reap the benefit later in the year. All credit to them2. I took a photo. You can just about make out one of the men – clicking on the pic brings up the full size version. 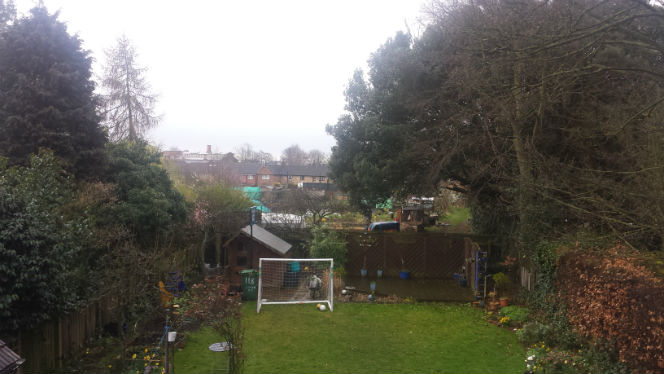 This morning I’m finishing the building of my woodstore. A rudimentary construction but hopefully one that will do the job. Fotos will be phurnished.

1 Everyone moved from the Victoria to the Strugglers when one Friday evening they put the price of a pint of bitter up by 30 pence in between rounds!!!
2 I don’t like sprouts anyway!