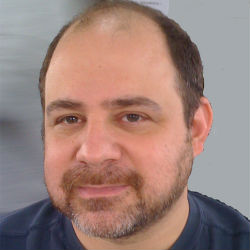 Happy to introduce Kory Kessel as the first editor (not counting me) of trefor.net . Here is his bio wot he wrote.

Kory Kessel’s 25+ years in high-tech span a remarkable roster of companies both large and small, and include such universally recognized brands as Grey Advertising, Dell, IBM, and Apple. His past successes, though, are not limited to ubiquitous commercial giants, as he has also completed government contracts for the Texas Education Agency, co-founded a London-based Internet gaming start-up (Quingo), and led the documentation effort for a first-generation mobile Internet services platform.

More recently, Kory has found himself deeply interred in Internet-based communications, serving a long stint as Jeff Pulver’s communication specialist for his various companies and ventures (e.g., Free World Dialup, Pulver.com, pulvermedia). He has also written (and ghost-written) a bevy of industry-specific white papers and articles on a freelance basis.

First among Kory’s achievements in information architecture is helping to develop and then subsequently documenting Apple Computer’s first PowerBook support and service program in 1993. Soon after he joined Dell, helping to lead the company’s nascent intranet initiative. His chief accomplishment at Dell, though, was serving as a key member of the IT team that conceptualized and then built the company’ first data warehouse, a project that comprised not only the construction of global financial and human resources databases, but also included the development and deployment of a proprietary suite of reporting software applications.

A proud Chicagoan by birth, a Texan by transplant, and a New Yorker by choice, Kory has made his home in Paris since 19991. He has a foodie’s soul, goes in heavily for sport, is an aficionado of jazz (pre-electric) and blues, and is constantly focused on his photography with a considered aspiration for eventual relevance in that field.

With his wide and varied background in technology Kory is going to be a great asset to the site. If trefor.net was a place where suits were worn and the CEO put out encouraging messages to the troops I’d be saying to you all “join me in welcoming Kory to the business and please say hello to him if you see him in the corridor.” Well I’m not that kind of guy and this is not that kind of business.

We don’t have corridors but we do have comments sections so feel free to say something in response to his posts. Nothing too soppy now. Just a firm handshake and a look in the eye:)

1 I think I first met him in a bar in London though I’m a bit hazy on that one.

One reply on “Meet Kory Kessel – an American in Paris & editor of trefor.net”

Just got to this…