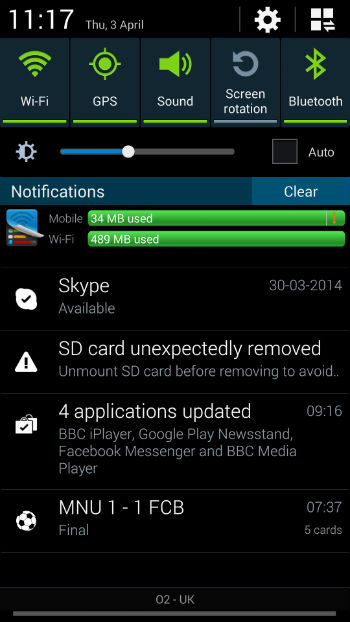 My thought go something like this. “Omg not more hardware problems with a Samsung Galaxy.” In the past I’ve had a plethora of USB connector problems, “water damage” problems (not!), screen problems. I’ve even had an SD card problem where I hard to replace the SD card becasue it was corrupting some of my photos including some imporatant ones with the kids at a Test match at Trent Bridge.

Now it looks like another but different SD card problem looming. I’m not naturally a pessimist but nowadays Samsung phones seem to do that to me. I’ve gone from a big fan, principally because they were the main alternative to me becoming an Apple zombie, to looking forward to when I have to change to a Nexus.

Reality is that all these gadgets are probably made in the same factories, looking down on a rice field somewhere where the a green eyed yellow idol casts its shadow1. I doubt there is much difference in reliability between brands.

They must think we are mugs. Or zombies. We probably are. There is no point in fighting it. Yes master.

It has to evolve to the way the Chromebook is going. Devices have to be cheap enough for it not to matter if they break, drown, are lost or stolen. You might think that mobile phones are already a commodity but at he high end and at those prices I’m not sure that is accurate despite the fact that the devices are manufactured in very high volumes.

I guess the problem there is that one you move to just competing on price you have to find other markets to grow your business but it will inevitably happen in the mobile word and perhaps the sooner it does the better. They are already finding it hard to introduce new ideas whenever a new model is launched so innovation must be slowing down. Bring on the disposable mobile phone and beam me up Scotty2.

1 Now I’m starting to lose the plot – I heard the poem the green eyed yellow idol on Desert Island Discs this week and I couldn’t think of any another flowery   words 🙂
2 In other words it’ll probably be a while yet – I’m sure if I was that bothered I could work when. It’s just a manufacturing cost curve.

While I’m here – you mentioned Chromebooks…
This new article might be of interest to you:
http://googleenterprise.blogspot.co.uk/2014/04/london-borough-of-barking-and-dagenham.html

Oo thanks – yes that’s v interesting. I assume you have to sign a contract with CPW so the rest of the cost of the phone will have been amortised into that one way or another.

When the time comes I’ll sell my Bitcoin and buy a Nexus. Now I wonder whether CPW take Bitcoin:)

Samsung devices seem to perform better as phones than other smartphones I have had but I have had a few lockups on my Ace 2 although I wasn’t doing anything of importance (was just playing a game) and no data corruption yet.

To be fair, the phone has had a couple of firmware updates in the time I’ve had it which have improved things like the touchscreen.

I do tend to e-mail things like pictures to myself so they are backed up on the PC (next project is a DIY NAS box) as I don’t really trust flash as a permanent storage medium.