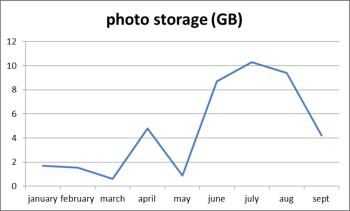 Yesterday my SD  card blew up on the Samsung Galaxy S4. Not literally of course otherwise the nature of this post would be different. It would probably be ringed with a thick black border mourning the passing of one of the brightest prospects ever to have graced the Morning Star. Either that or it would be quite short as I might well have been typing one handed having been removed from the operating theatre via intensive care to a big ward where I would have felt quite out of place being young and full of life.

Last night I spent some time on the Netgear ReadyNAS retrieving files. Except most of them weren’t retrieved. You need a PhD in Sys Admin to understand that box. It works like a dream just sitting there backing up my stuff but try doing something with it!

The browser interface only lets you download one file at a time. No good if you want to restore 100,000 photos or quite a few less songs. Ditto the ReadyNAS app on the droid. Now this isn’t a workable long term prospect.

I dropped on to the box using FTP from the Chromebook but for some strange reason the ReadyNAS only let me see three months in 2013. In the past I remember not being able to access it using my work Windows* machine but the kids were always able to see it on the network using Windows7.

My old work Windows8 Dell machine is now Kid4’s Windows7 Dell and he being at school, albeit until lunchtime (schools out for Easter yay) I’ve logged in as a guest and am currently retrieving my sounds. I just need to pop out to Maplins to get as new SD card and hey presto I’ll be up and running again. Truth be told I only really listen to about 20 songs and I already downloaded them individually from the ReadyNAS whilst lying in bed this morning.

So ReadyNAS. Not totally straightforward but I wouldn’t be without it.

Other posts you will almost certainly want to read: