A few months back my brother-in-law (heretofore referred to as BiLly) treated me to lunch at a new Yannick Alléno resto in Paris called Terroir Parisien, located in the Palais Brongniart near Bourse. There we enjoyed a deeply satisfying meal, sampling from a menu that features stalwart Bistro dishes made new with the help of a pinch of little-here-little-there creative tweaking (i.e., Pot au Feu, Boudin Noir). Having indulged previously, my BiLly suggested — well, insisted — that as a starter I take the Champignons rosés de Chez Spinelli à la Fleur de Sel (a long fancy French way of saying “Crazy-fresh cremini button mushrooms produced by the renowned grower Spinelli, served with flaked sea salt”), and having no reason whatsoever to doubt the temerity of his urging I did just that. Uh..oh yes..YES, a point — no, two points — for BiLly.

Some weeks pass, and on a recent Friday night my BiLly’s wife and mine (sisters) found occasion to put a couples dinner on the calendar (with one of my lovely nieces included). My Missus had not yet experienced Terroir Parisien, so a booking was made and a table soon occupied. Menus passed around, experiences recounted, and soon enough My Missus was ordering…yep, those mushrooms (wanting to explore the menu a step furher I didn’t go again for the dish, somewhat to my regret). Lots of “Mmmmm!” and wide-open-eyed happiness, and then the “We should do this at home.” The 5-ingredient roster was no secret — so-fresh-they-snap-between-your-teeth Cremini mushrooms, flaked sea salt, hazelnut oil, faiselle (cottage cheese, or close enough anyway), ciboulette (chive) — and the presentation was right there before us. So why not?

In this space on 6-April I waxed on (and on) about the Orbec mushrooms we strive to lay hands on at the Lisieux Saturday morning farmer’s market whenever we are passing time at the La Famille Kessel Normandy hovel, and these we knew would do nicely. The salt, the oil, the cheese..check, check, check. And the ciboulette grows wild in the garden.

So here is where my narrative will take on the air of recounted recipe, playing — I can only hope — to my technical writing strengths (save for citing amounts as my experience may not be yours, hungry read, and hinges on how many salivating maws you are looking to sate).

Kory on the clock. Knife in hand. Lunch won’t wait. 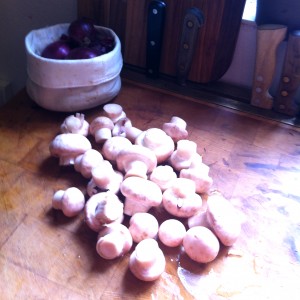 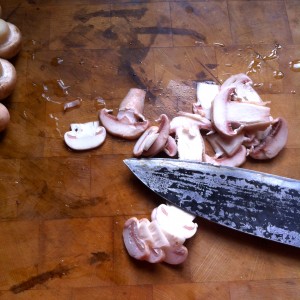 First, I washed and trimmed the Orbecs, taking care not only to rid the marvelous mushrooms of any adherring sand but also cutting enough of the stem away to ensure that the only “woody” evoked was in their flavor. Following that, I carefully cut the Orbecs in a vertical slice (think top of button down to end of stem) at 1/8th inch thickness. Next, I arranged the slices on 5 plates (5 people) in a symmetrical spiral — for anyone out there following along, feel free to express your creativity in how you arrange your mushrooms…this ain’t “My way or the highway” territory — and moved on to the faiselle. 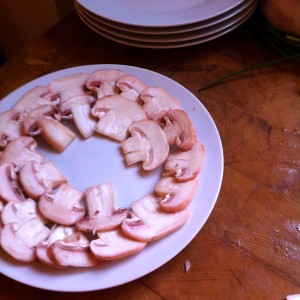 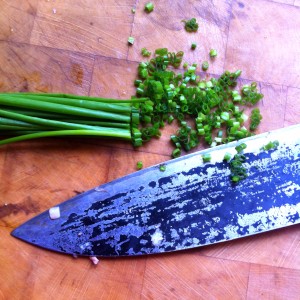 Methinks it is within the faiselle that the trick of Champignons rosés de Orbec à la Fleur de Sel lies. Taking a small bowl in one hand and a fork in the other, I mixed flaked sea salt into the faiselle, test-tasting it until…until…well, until I liked the the taste. I set the mixture aside.

Next, I poured the hazelnut oil into a small container into which I could easily dip a teaspoon. Set that aside too.

Cleaned and minced the fresh ciboulette and set that aside. 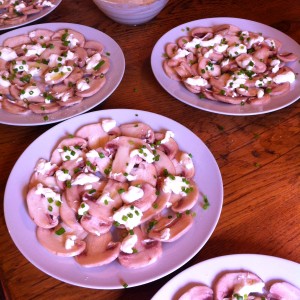 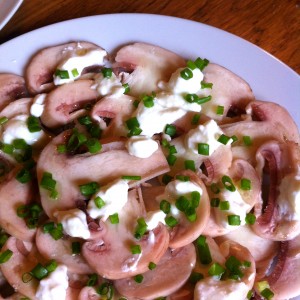 And that’s that. I yelled “À table!” to assemble our running band of eaters, sliced up a crusty Boule, and braced myself for the “Mmmmm!”

Although it doesn’t pay the bills, much more interesting than unified communication.