We are back to typical British Bank Holiday weather today. It’s ok. I’ve done (ish) all my outdoor jobs for the moment. The sky has darkened and the wind is getting up.

I will have to do the blokey thing and go out to man the bbq at tea time but the bbq has a lid on it and I will have a beer in hand so all possible weather counter measures will in place. The beer won’t protect me from the rain but ensuring I get just as wet on the inside as on the outside seems to negate the effects.

The house is quiet. Although it serves as a shelter to kids 3 & 4 they are past the age of rushing down excitedly to start shovelling Easter eggs down the hatch. Classic FM is on the wireless. The world is at peace. 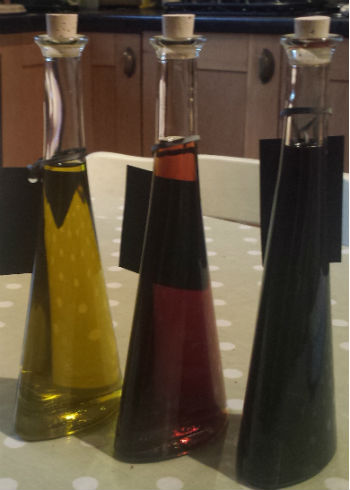 The photo shows some condiments procured last week on the Isle of Man. Basil infused olive oil and two vinegars: tomato and blood orange. The latter is particularly fine and doesn’t need to be accompanied by oil. A nice bit of organic bread to soak it up from the plate is just the job.

The rain is now coming down in earnest. It’s very relaxing hearing it on the conservatory roof. There are roses and lillies in the conservatory. The rain doesn’t stop the birds. I can hear them singing away. Probably sat on a branch in a bit of shelter chatting to each other – about the weather. It’s not only us humans who do that sort of thing.

Scattered around me are various musical instruments. The conservatory does get a reasonable amount of use all year round and tomorrow hopefully the rain will have moved on and we can have the doors open to the garden. We have people coming to lunch. Another bbq. 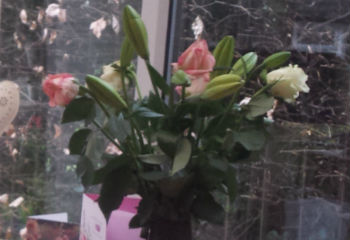 Still the rain comes down. It sends a shiver of relaxation through my spine. I’ll have to get showered and dressed soon. When Mrs Davies comes back from her dose of religion I am on chauffeur duties taking her and her pal to a craft fair in Doddington Hall. Ordinarily Anne would drive but Kid2 has taken her car to Pontefract for a weekend doing whatever they do in that part of the world. Look it up on tripadvisor. It will quite possibly identify the only attraction as Pontefract Racecourse. I haven’t looked myself.

Nothing wrong with the races but they do expect you to go home at some point so Kid2 have had to find other diversions to keep herself busy. Probably involves a pub.

Over the fence in the allotments I can see a Lincolnshire flag looking sorry for itself. I must get our camping flagpole out. Keep thinking of doing it. We have a pirate flag and the national flag of Mexico purchased at the football in Cardiff during the Olympics. You know it makes sense. I can tie them both on. That way I’ll always be able to find out house amongst all the others, assuming I’ve forgotten our address and what the house looks like.

I don’t really do craft fairs meself so I will either sit in the caff watching the world go by or nip somewhere else. It’s an adventure. Big pic below is of the oils and vinegars for sale in industrial quantities at Tynwald Mills in the Isle of Man. 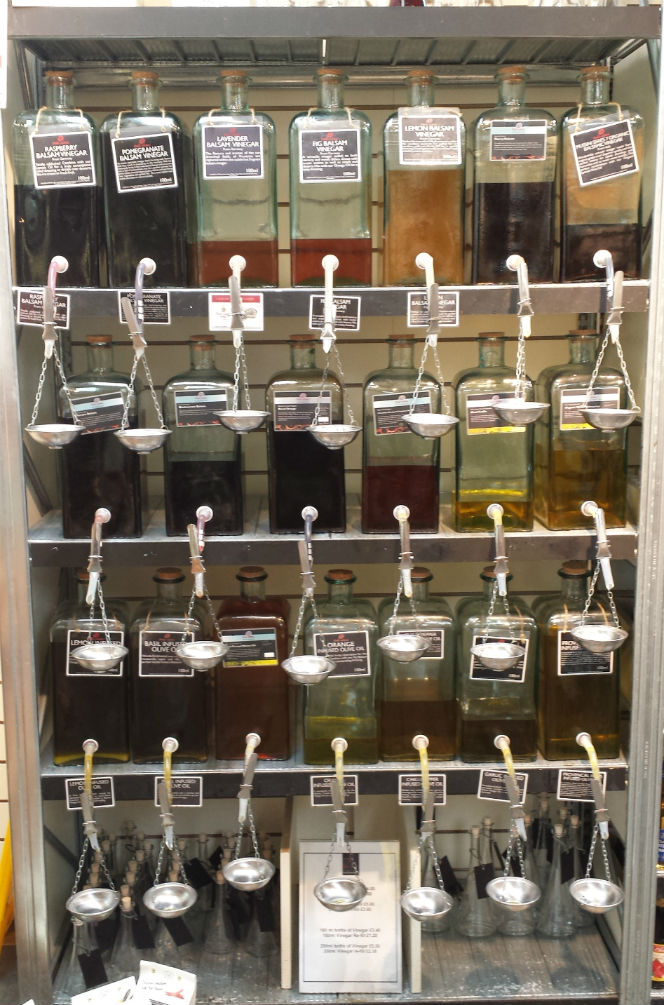 Well we had glorious weather all weekend. We went camping with some old university chums. Camping from Thursday to this afternoon. We’re all sunburned. It was admittedly chilly at nights (minus 6 at the low point) with hard frosts first thing in the mornings. Sounds like we had a much better deal than you did.

Today has been good. I yearn to go camping but my lot are no longer interested.