Lying in bed in a motel room alongside the Mexican border, I was awakened just after midnight by a deadbolt clunk from the room next door. A loud clunk, jarring even though the person behind it was probably trying to be quiet. Fifteen minutes later, that clunk again.

I peer out the window and catch a glimpse of a sturdy looking fellow, wearing a kerchief around his neck.

Truck headlights beam in through the window, and are just as soon gone.

Who makes quick visits at this hour? “Drug deal,” comes straight to my mind (which can be prone to fantasy).

I lay back down and stare at the speckled popcorn ceiling. The carpet in the room is clean and new, though both the pattern and the color are straight out of the 70s, and there’s your typical motel art on the walls. Sleeping here is a form of time travel.

Driving through this desert country, staying in this motel…it all reminds me of the movie “No Country For Old Men”, based on the book by Cormac McCarthy. And McCarthy got his descriptions of west Texas just right — romantic and rough (which I can attest to not only because I was raised in the border town of El Paso, but because McCarthy lived a block down from one of my childhood friends). My mind may very well be prone to fantasy, but a childhood friend was shot in a drug deal. Reality and movie fantasy are usually quite different things, but on the border reality can sometimes play like a movie. 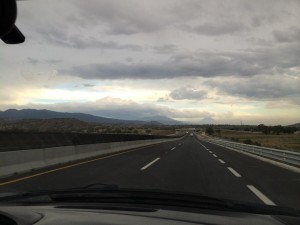 I’m on a road trip with my soon-to-be ex-wife, driving a cheap mini van we picked up in Austin for the purpose of transporting three of our dogs to her new home in Mexico. Road trips are one of the things that my wife and I do well together, and we have taken more than a few, but now we’re at the end of a long divorce and a road trip seems a weird thing to do as one of our last married rituals. It’s strange, creating something new while at the same time letting go.

It’s Maya, the Hindu concept of the illusion of reality. Or delusion. We think we are in control, involved and participating, however it is all impermanent…only illusion. I know that’s not the exact definition (though I am not sure there IS an exact definition), however lately that has been my experience of the illusion. I am engaged in the external world, but at the same time I am a distant observer. I am creating the reality, and at the same time I am part of the creation — subject and object at the same time.

Actually, I find my current perception similar to when we come together in software development teams. We create something together, putting a little of ourselves into code and scripts while simultaneously letting go of that creation.

Look…basically I am just a dumb DIY kind of technologist, one without much formal education with which to back up my opinions, and one who sometimes thinks he doesn’t really know what is happening in technology at all. And yet, over and over again, I end up in rooms with Ph.D geniuses, deep into philosophical discussions on the nature of reality that are at the same time all about technology.

While working at IBM in 1997 I learned object-oriented programming by watching an IBM Fellows whiteboard lecture on VHS tape. Then, over the next year while working on frameworks for CORBA, my officemate and I often discussed the nature of reality — all in terms of object-oriented lingo. This colleague’s name was Simon Peter Hemingway (a name I always loved). We would often take long walks and talk about the nature of defining objects, with Simon trying to convince me that reality was an illusion. He held a Ph.D. so he must have known what he was talking about, right?

Last night I popped onto the motel wifi. No password needed. Welcome to the Wild West.

Once online I used my phone to make a Facebook post on a television show…is this what the technology has come down to? I won’t use Twitter because I just don’t see the point, but I use FB to communicate with friends. I’m paranoid about security of the server at work, but I trust my phone’s network access to the unprotected motel wifi. I see news reports that say FB is for old fogies. Maybe I’m too old now for the technology game…maybe I’m blind now to what technology is all about. Or maybe technology is just emerging so quickly into every moment that it all cannot be grasped by our meager minds (prone to fantasy or not).

Before actually starting in my intention was to write about leaving my job with a semiconductor company. Before yesterday — my last day with the company — I created software with a team of people designed to help other engineers design chips. In leaving, I thought I would be able to capture some insights on the Zen concept of letting go. You know, the whole you must empty-you-cup before you can fill-your-cup thing? I have this idea that if we bring mindfulness to our creation of technology that we will somehow create beautiful innovation. Anyway, that’s what I wanted to write about today, the stuff I mean to explore during what I see as a short break from working again on some full-time project somewhere. But then my hotel neighbor clunked his deadbolt, and…

A thread of thought launched…not, not a thread, a stream…like I was dreaming all of this, and I had to get down the raw truth of it before I forgot the elements of the dream.

The last scene in “No Country For Old Men”: The Sheriff has a dream in which he sees his father walking ahead, holding an ancient fire. He feels compelled to follow, even though his business on earth is left undone.