“Honey, turn the car around! You have to see that!”

My Missus, who for a few weeks has been doing most of the driving due to some new out-of-the-blue concern over insurance coverage (I drive on a valid Texas driver’s license, not the Permis de Conduire I should have by this point, some 14+ years in-country), shoots me a hard questioning look, to which I respond with “I saw an amazing falcon, perched on a fence post by the side fo the road. You have to see it. Go back.”

No argument. At the roundabout coming up My Missus takes the full turn and heads back the way we just came. Soon enough, all four of us (The Boy has a friend visiting) catch the profile of the remarkable animal, still proudly perched on the same fence post. Maybe two minutes have passed since my initial sighting. Three tops.

A hushed “Wow.” and other such murmurs run through the car, which My Missus has pulled over to the side of the road opposite the bird of prey, but mostly we are all just holding our collective breath in awe. The falcon is truly magnificent, and his regal quality…palpable. We wait, we watch, and just as I am starting to think “Hey, isn’t that a camera on that strap around my neck…?”…he takes wing. A wildlife documentary all our own. And then time starts again, and we continue making our way to Houlgate for an afternoon of watching other things taking to the sky…kites! 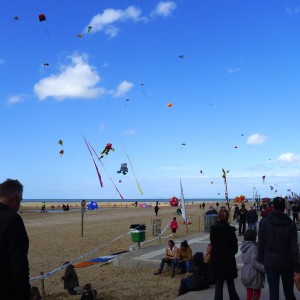 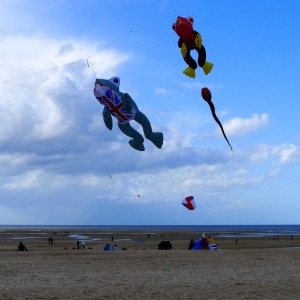 The Houlgate Plein Vent (literally translated as “Houlgate Full Wind”) is an annual kite-flying festival held in the Normandy beachside town of Houlgate (pronounced ool-got) that is in its 18th year, though this was the first year La Famille Kessel attended (in fact, before this year we were scarcely even aware of it). And though we thought we knew what to expect — a kite-flying festival…gonna be lots of kites — we really weren’t prepared for the level of spectacle. A deep blue sky filled with kites of different shapes, designs, and sizes…sure, that was part of it (and a terrific part of it, make no mistake), but it was also quite a bit more than that, with all kinds of wind-driven goodness strutting itself on and along the beach too. 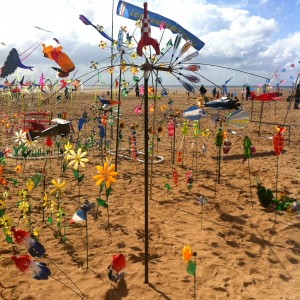 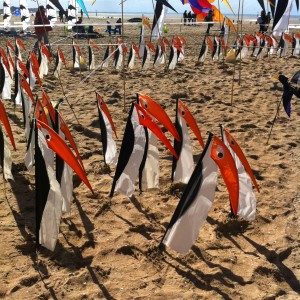 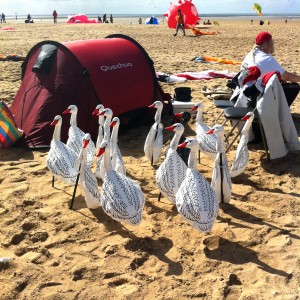 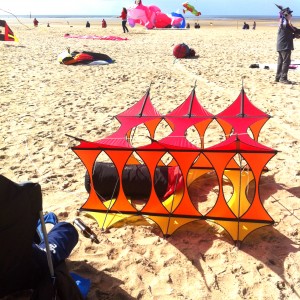 We made our way through the boardwalk crowd, stopping to snap a picture every third step or so, ended up getting separated (well, I got separated…My Missus never lost touch or sight of the young ‘uns), and reunited at beach’s end in time for the coup de grâce: a fantastic synchronized precision kiting performance set to AC/DC’s “Back in Black” (and, yes, all of the kites used were black…mostly). 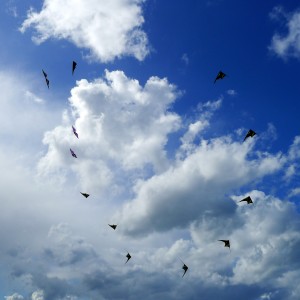 This being Normandy, the gorgeous sunny spring day of our arrival in Houlgate transformed quickly into weather requiring a run for shelter, which a large tent café set up for the event provided quite nicely…but not before The Boy cajoled his parents into sinking 20€ into a kite he could call his own. A short wander around the tent, an event tee shirt purchased, and as suddenly as the skies went dark they were once again clear, and shortly after that we had our own kite in the air.