I have been involved with the VoIP scene since 1999 when my employer at the time, Mitel, decided it would “get into VoIP”. In those days the discussion was very much whether SIP or MGCP would win out. Each platform vendor had its own version of MGCP so the bet was placed on SIP.

At Mitel I developed one of the earliest SIP phones. It was a variant on one of Mitel’s standard (and proprietary) Minet phones that was sold in volume with their  3300 PBX. In those days it was the custom and practice of the great and the good of the SIP world  to converge each January for the Paris International SIP Conference.

I recall that at my first year at the Paris Conference I went counted three SIP clients: a Microsoft soft client (for MSN), a Pingtel Java phone (now defunct) and if I remember right an Analogue Telephone Adaptor. The following year the number of handsets increased to around five including my own Mitel SIP phone and in year three we thought we had hit the jackpot as I counted a dozen or so clients. That was the year we considered the industry to have gone seriously mainstream. 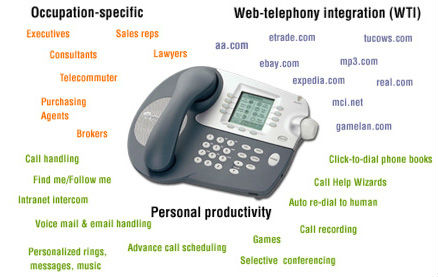 I stopped counting after that because by year four I couldn’t fit all the handset photos onto a powerpoint slide.

The problem at the time was there were very few Internet Telephony Service Providers around to buy/sell the handsets. At the six monthly pulver.com Voice On The Net conferences only a single session was given over to talks by ITSPs. There just weren’t any and the small number that did exist had few subscribers.

Had we had a blog week of VoIP posts back then it would have contained primers on what the technology was all about, debates about which protocols would win out and wistful gazes into the future looking at a networked world that consigned ISDN and the Plain Old Telephone to the science museum. All pioneering stuff.

This week we are having a week of posts about VoIP on trefor.net. A wide range of real world subjects is on offer including the problems of VoIP fraud, how to defend against this fraud with more secure provisioning, why it is important to get your connectivity right, net neutrality, number porting in the VoIP world, how to develop a VoIP phone, designing a conference phone, location services for emergency calling using VOIP, the evolving world of Unified Communications and a look at Microsoft Lync.

The world has moved on from those early days of VoIP. In the UK the Internet Telephony Service Providers Association now numbers around 70 members and the reality is that the total ITSP count in this country is probably nearer double that as ITSPA members don’t typically include those white labeling or fronting someone else’s back end service. This diverse collection of posts has been written by C Level Executives from around the VoIP world, both from service providers and their equipment suppliers who now have a critical mass of sales to be able to support ongoing product development.

We are at the point where VoIP is no longer a hard sell. People are asking for it. They all use the tech in their every day lives and want to start seeing the benefits for their businesses. It will be a long time before the Public Switched Telephone Network  disappears but you sense that time will definitely come. In one sense the only thing that is stopping VoIP from taking over completely is that you still have to have a copper line with an associated telephone number in order to carry the broadband line that allows VoIP to work. A move to a world of ubiquitous data only connectivity would kill off the PSTN once and for all. At least sooner rather than later.

In the meantime the VoIP industry goes from strength to strength. ITSPA membership is growing in number and every member is growing in size. It is a good time to be around VoIP.

Please come back and read the posts as they are published each day. For many of the contributors it is their first time on trefor.net but they are all leaders in their field and their views are worth hearing. None of the posts are intended to be sales pitches although some of them do use their own company experiences to illustrate their story.

It wouldn’t have been so long ago that these experiences would have existed only on paper and there isn’t a print edition of trefor.net:)

If you want to connect you can reach me via trefor.net on Skype or [email protected] on Google Hangout. We don’t do landlines at trefor.net…

One reply on “#voipweek on trefor.net brings diverse set of posts”

ah, Pulver & VON. I remember VON. I got my first job in the VoIP field after attending VON in London, and Jeff invited me out to VON in Stockholm the following year, which was nice. I still have the old goodybags somewhere.

Jeff had started FreeWorldDialup shortly before (sadly it’s rather defunct these days). I’d never have got into this industry if it wasn’t for FWD, and evenings spent tinkering with a Cisco 7960 talking to people all over the world for fun.