The connected kitchen, made possible by IPv6 and the internet of things is something oft discussed. Fridges that remind you when you need more milk or when the milk is about to go off is one “useful” and habitually touted suggestion that springs to mind.

I was recently chatting to my mam and dad about the coal fired range that used to be in my Welsh grandmother’s stone floored kitchen. The tone of the conversation was how technology has moved on. It came as a total surprise to hear that the range was a step on from my mam’s childhood in Ireland where all they had was an open fire with some bricks around it to prop up the saucepans. 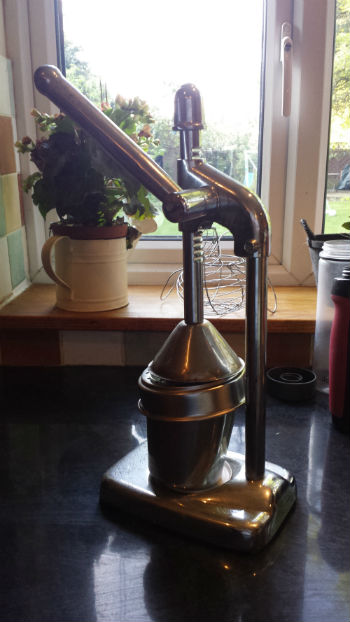 We now fill our kitchens with more gadgets than we really have room for. At our house we have a food mixer, handheld liquidiser, pasta maker, slow cooker, George Foreman Grill, orange juice squeezer (hand held lever job) orange juice squeezer (electric), garlic press, two fondues, a tandoori oven (clay pot), scales (electric and with counter weights) as well as the usual microwave, kettle toaster, dishwasher, fridge and rangemaster double width cooker.  I’m sure there must be more. Just can’t think of any and Mrs Davies ain’t around to ask. The (cheapo) bread maker was rubbish and was thrown out years ago. It’s been replaced by the fair hands of Mrs Davies who kneads an excellent loaf.

Imagine if all these gadgets were “connected”. For one thing we would need a very robust Wireless LAN. What sort of data would they provide?

The orange juicer would be able to let me know how many oranges I’d squeezed in its lifetime, average number of oranges squeezed per day, volume of orange juice provided etc etc. I could probably associate a google account with juicer username – multiple usernames of course to accommodate profiles for the whole family.

This would enable google to sell my data, anonymously of course, so that  I could benefit from great deals on  fresh oranges, spare juicer parts (these metal squeezing bits don’t last forever you know) and even juicer servicing contracts where the bloke turns up to fix your juicer just before it is about to go kaput (or whatever juicers do at the end of their life).

We would need the juicer to automatically recognise users – logging in would be a faff. This would generate a hugely lucrative new wave of internet enabled juicer sales. This isn’t the kind of thing that can be retrofitted.

And then there’s the app. Downloadable from the Play Store, App Store, Marketplace or whatever your phone or tablet uses. It’s all good stuff for an economy emerging from the worst recession since the bubonic plague.

I’ve only mentioned juicers so far. Yer juicer would be integrated with the fridge to coordinate stock level of oranges. You would have to keep the oranges in the fridge even if you don’t do that now. It’s the only way of keeping track of stock levels. Whoever heard of an internet connected fruit bowl! Doh!

And don’t forget to let your fridge know when you are off on holiday. Last thing you want is the Tesco van turning up to deliver automatically ordered oranges and you not being in. Think of the growing pile of increasingly rotting oranges on your doorstep. What a waste. What a pong!

I’ve only really mentioned the juicer but each gadget would have its own unique set of data. The GFG would tell you how much fat it had extracted from your diet, the breadmaker, should you have one could tell you how much fat you had put back in to your diet. The GFG could obviously hook up with the breadmaker to tell it to go easy on the portion size. The toaster would also connect with the breadmaker to tell it that more supplies were needed. This is all such useful stuff. Innit. Reality is that we probably would find uses for a connected kitchen but won’t know what they are until we’ve tried a few of the connected apps and gadgets. Just like some apps on our phones strike a chord1 and some don’t and are discarded contemptuously or just clog up your screen never to be used.

Me old gran would be turning in her grave. Suspect a connected griddle wouldn’t have made her Welsh Cakes come out any better. Lovely they were:)

In the meantime I’ll just have to stick to asking the butler whether cook has finished making the bread for the day. Lovely smells wafting up from the kitchen to the East Wing.

1 I have the guitar tuner app, actually