A few years back the following kernel of ridiculousness went in one ear, hung around long enough to make a mark, and went out the other: To capture enough solar energy to run the state of Arizona would require enough solar panels to entirely cover the state of Arizona. I don’t recall where I picked up that too-convenient statistic and I never confirmed it in any meaningful way (or any meaningless way, for that matter), but for years I have been guilty of bringing it into the conversation whenever the subject of solar energy has come up, mostly I must admit because the very idea entertains me no end. With this firmly planted in mind, over the past two weeks the subject of solar roadways (or perhaps I should write Solar Roadways, as it is a patented technology and that is the name of the company that hopes to use it to change the world) has come up in my presence no less than three times. In each case, the person bringing the juicy tidbit up for discussion swore up and down that they had heard that this new solar technology idea was quite revolutionary, making use of a solar energy collection methods and materials that are far better than what has commonly been known up to this point. The conversations were quite disparate, the people involved knowing each other only tangentially at best, and yet I figured the whole solar roadways…er Solar Roadways thing had to be some kind of an Internet meme…something I missed on Facebook and/or Twitter that was just making the rounds. It was only with the third mention, that I started to think I should burn a pixel or two to find out exactly what had the masses in a renewed solar energy rage.

First, I thought I should try to find some kind of pointer to the whole “Covering Arizona” thing (Coen Brothers fans, rejoice!). I googled and googled again. Then a third time. I also binged, and more than once. Nada. Now perhaps I overestimate my Internet search skills — I think I am Top 10 worldwide, and neither you nor your friend nor your friend’s brother can convince me otherwise — but even if I am only marginally adept (and I am far far better than that), I figure something would’ve turned up if there is or ever was any truth in that wonderfully wacky supposition. Alas…

So myth debunked. Next I decided to bring myself up-to-speed on solar energy technology. My inner science geek was born when I was but a wee youngster and it continues to live and breathe within. Unfortunately, though, I cannot say I have kept up with the evolution and progress of the energy sciences beyond the level of layman (computer-based tech is just too much fun, and there are only so many hours in a day/week/month/year/life). So off I went in search of education, and immediately I learned that the raw cost of solar energy year-to-year has been dramatically dropping for some time and continues to do so. In fact, new concentrated solar technology is said to be up to five times most cost effective than those ubiquitous standard flat photovoltaic silicon panels, putting it on par with oil and natural gas. Also, prototypes have achieved a concentration of solar energy that is more than 1,000 times greater than those panels. Go figure! 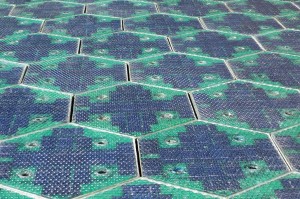 Relieved of preconception and far better informed, it was time to put my proverbial pedal to the metal and find my way to the now-seemingly-everywhere subject of Solar Roadways. Be it the result of a well-executed publicity blitz or a news confluence resulting from the $1 million the company has raised in recently-launched and still-ongoing indiegogo crowdfunding campaign (or both), Solar Roadways is the annoying buzz on the solar energy front that is currently tickling our collective ear (The Verge, CNN, The Washington Post, TechCrunch, The Daily Mail). The tech and company is the brainchild of Scott and Julie Brusaw, an Idaho couple, who since 2006 have been working to develop solar panels that can be installed on roads and in parking lots, capable of collecting massive amounts of clean energy from the sun. Able to keep the streets on which they reside free of snow and ice, Solar Roadways panels — which are made from ruggedized glass and can connect to each other via mesh network (in the event one fails, the system will notify its need for maintenance) — can also illuminate those streets and display warnings via LEDs. They also are said to be capable of cutting greenhouse gasses by up to 75% (this, of course, assuming that the tech hits worldwide critical mass). And perhaps the most appealing aspect of this astonishing-seeming technology, even more so than vast practical applications and inevitable economic benefits Solar Roadways can potentially offer? It LOOKS like the future!