Knowing that Tref was heading over to the U.S. for this week’s Genband Perspectives 14, I asked the fearless namesake of the cracking website you hold in your hands if he would be up to muling a spiffy new Samsung Chromebook 2 back over the pond for my pickup at trefor.net’s Pissup in a Brewery (which you really don’t want to miss) later this month. Unsurprisingly, he responded with a hearty “Sure, M8.” and I was off to the races…well, off to find a shipper who could deliver the device shipping-free and tax-free to Tref at his Orlando hotel prior to his return flight, that is.

Naturally, my first surf-to destination was Amazon.com, however although they had my desired Chromebook in stock I would have to pay extra for both shipping and sales tax (6%). Sales tax? Amazon? Said to be on the cusp for years, I guess some law somewhere was passed and it finally took hold.

Next I tried Samsung.com, which promised free shipping…and no sales tax. Oh, except in states in which the company has a physical business presence, such as Florida. Needed to go all the way to the final click to learn that (and confirmed it with a Samsung Phone Drone, too).

Finally, after a few more hits-and-misses my search ended at New York’s famous B&H, which not only promised free shipping to the Sunshine State but a tax-free transaction as well. The only problem was that I would have to wait a little over 30 hours to actually place the order due to my having stumbled onto the B&H site during the Jewish holiday of Shavuot, because although you can peruse B&H’s website during Jewish holy days — the Sabbath each week, Rosh Hashanah, Yom Kippur, the two-day periods that bookend Sukkoth and Passover…and Shavuot — you cannot actually place an order while any of these days are in progress. To their credit, B&H clearly indicates such restrictions on their site when pertinent, even going so far as to offer a very useful countdown clock on the site that indicates when they will once again be open for business. Free shipping, no sales tax, a one-week window for it all to happen in…I could wait 30 hours. 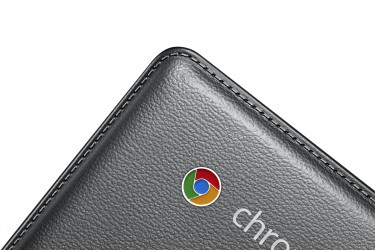 The reviews are rolling in on the Chromebook 2, and while they aren’t universally great — it’s certainly no “Jesus Phone” — they reflect my expectations for the my soon-to-be-new friend and then some. Sleek, light, stylish (that faux black leather case and stitching!), the Chromebook 2 also has a lot more under its keyboard than its predecessor (which was NOT saddled with the moniker “Chromebook 1”), being markedly faster and offering a somewhat better screen and trackpad. All good stuff. Good enough, in fact, to pull me back into the Chromebooked less than four short months after having eBayed the original KoryChrome back in February. References to “The Godfather, Part III” unnecessary.

30 hours later. 09h00 Eastern Standard Time (15h00 in Paris’s GMT+1), and following a quick touch-base with a B&H Phone Drone (who assures me the package will arrive on the promised date of 12-June, which is one day to spare…might even show up on the 11th) I pull the B&H trigger on Chromebook 2. And less than 30 minutes later I learn that my delivery window is short by a day due to my having boneheaded the nitty-gritty detail of Tref’s #orlandoroadtrip. Yes, our man’s adventure runs from 6-June to 13-June, but he is actually set to clear U.S. on 12-June…the day B&H Phone Drone near-guaranteed the new KoryChrome would make its grand entrance in Orlando.

Did I really do that? Me, the guy who in the past 15 years has overnight-flighted the Atlantic no less than 120 times? Well, no matter. Chromebook 2 hadn’t shipped by this point — B&H was happy to take the order on the Friday, but due to the Sabbath it woudn’t actually ship until Sunday — and I was relatively sure I could cancel it if need be. So I pinged Tref, just to let him know my swirling thoughts on it all. He clued me into his late-ish departure time on 12-June, and with that I made my leap of faith (into the abyss?), opting to let the order fly. After all, even if the package misses Tref in Orlando, how hard could it be to arrange for its return via the hotel, United Parcel Service, and B&H? (He writes with a touch of both sarcasm and extreme naiveté.)

And that is where things stand on this fine late spring Wednesday. B&H confirmed my order on Sunday via an efficient email, and I know that the package left Maspeth, NY on Monday evening. Where between Maspeth and Orlando it is now, though, is nothing more than a WAG, though ever-faithful readers are welcome — encouraged, even! — to join me in attempting to track the new KoryChrome’s voyage to Orlando. Crossed fingers, good thoughts, focused karmic energy, muttered chanting, speaking in tongues…whatever any of you have to give that can help ensure the new KoryChrome’s safe passage into Tref’s hands, I’ll take it!

6 replies on “Wherefore Art Thou, KoryChrome?”

If only I could get excited by anything Google build, or, in reality, put their name to……I am though, deathly curious to see what this version is like, so keep us posted, Mr K.

Offering an update here for those out there who are not themselves tracking the delivery of KoryChrome…as if anyone would be so bold as to not do so!

Latest. KoryChrome has arrived at Tref’s hotel in Orlando and he is on track to bring her back, a lucky piece of tech indeed, likely to spend the whole of its usable life on the right side of the Atlantic (or, at least, the part of its life that comes between now and when I sell her to her next owner on eBay). Whoo-hoo!

Tracking update. the KoryChrome is now on a train headed Northbound towards Newark Northgate train station

Can’t wait to hear about the new Chromebook. Have been holding off waiting to see what Kory thinks of his new gadget before I delve into the Chromebook world!