I have a shiny new Acer C720 Chromebook (in Granite Gray1) at home. I also have a shiny not so old Samsung XE303C12 Chromebook that I have been using as my main office laptop since last Autumn.

I decided I needed two devices because I want to separate my business and personal life and having both sets of credentials on my one and only laptop means that the line between the two is somewhat blurred.

Due diligence was cursory in nature. There aren’t many useful reviews out there and no useful comparison of the differences between the two. Unless I’m not doing a good job of looking this seems to be the case whichever Chromebooks you might want to compare. In general hardware reviews often boil down to a comparison of specifications. Intel vs Arm hardware, screen size, battery life etc etc. This seems to be true regardless of the type of hardware – mobiles, tablets, laptops, TVs etc etc etc.

In the absence of what I considered to be useful guidance I decided that battery life was the most important feature and all other things considered I might as well go for  the cheapest. I got a result here in that I ended up paying £20 less than the advertised price of £199.99. Check out how here.

The Acer C720 I went home with turned out to be just as good as the Samsung I paid £230 for (it’s now £199.99) and in some respects even better. The screen sizes are the same but the battery life is notionally better in the Acer than the Samsung. 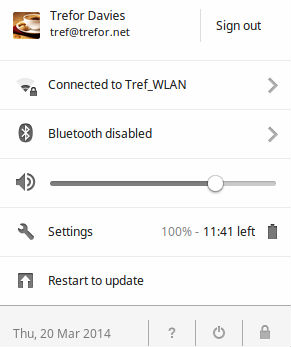 Being at work I just unplugged the Samsung from its power supply and am told there are 4hrs 43 minutes of battery left. It varies depending on how much power the Chromebook is taking from its battery at any given time.

The screenshot on the right shows the Acer, unplugged after fully charged for the first time, with a whopping battery life of 11. hours 41 minutes. Once the Chromebook properly realised what was going on this settled down very quickly to 7 hours 40 mins (pic here) – still more than respectable. Clearly also better than the Samsung although lets remember that the Samsung is a few months old now. A quick Google suggests the Samsung battery life spec is around 6.5 hours cf 8.5 hours for the Acer.

My test was far from scientific but the Acer does certainly seem to have a longer lasting battery. I’ve had the Acer now for 4 days and only charged it up twice.

Weight is also a concern. The longer battery life needs to be accompanied by something that is not so heavy to cart around.  The Samsung Chromebook is great for this at 1.1Kg. I don’t really notice it is there, certainly compared with the Dell Microsoft Dinosaurusbook I used to use. Also the Samsung is only 17.5mm thick.

. Only kidding. It’s 1.25Kg and 19mm. Nothing in it really. The two photos below show one on top of the other. With the Acer on top it looks quite a bit thicker than the Samsung. However when you stick the Samsung on top  there doesn’t seem anything in it.

The other views also show very little difference. Front on or side by side they are pretty much the same.

The Samsung has slightly more sophisticated looks but on balance I prefer the Acer. The touchpad on the Samsung has occasionally locked up on me and with the Acer I don’t sense this is going to happen. It is somehow more clickable.

The final point for this first Acer C720 comparison with the Samsung X303 Chromebook is about power supply connections.

It is such a shame that the two use different connectors. This is presumably down to different Voltage specs – I’ve not bothered looking. Life would make so much more sense if everyone used the same one. Then I’d have a backup if one ever broke on me. As it is if that happens it will be a faff buying another. Hasn’t happened yet but I don’t think I’ve had a laptop where the power supply hasn’t died on me at some stage. Maybe the better battery life signals less strain on the power supply and longer component mtbf. 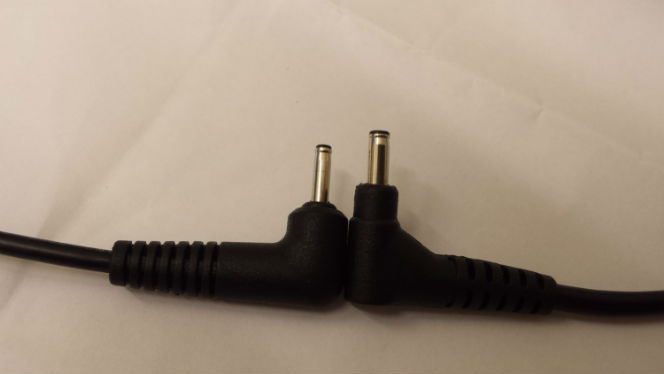 Remaining reviews this week are going to focus on the practical experience of using two different Chromebooks for personal and business use. The software is the same for both. I have already made my mind up on a favourite and that is the Acer. The feel of it, the better battery life and the fact that the touchpad seems better has clinched it. I also managed to get the Acer at a lower price than advertised though both Chromebooks are notionally the same price. Not sure I’d bother going for any more expensive alternative.

Excellent thank you, I’m still “umming and arring”! For example, a colleague of mine has just bought the HP 14″ version (same CPU) and discovered he can’t watch his Amazon instant video (the new name for lovefilm), presumably due to the horrible reliance on silverlight…

keep me posted. I doubt I’ll cover all use cases so any inputs gratefully accepted:)