In line with Broadband Week on trefor.net, the Hump Day Five either benefits, suffers or remains mind-numbingly inconsequential…you decide. 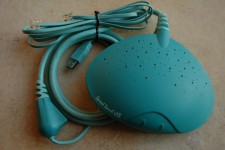 Fourteen years have passed since I arranged my first broadband Internet service in Paris with France Telecom, and yet it is no effort whatsoever to recall that first setup. Is this because I have an elephant’s memory? Well, it could be (because I do), but it is far more likely due to the utter ridiculousness of the Alcatel Speed Touch USB ADSL modem that came with that subscription. I remember when the box arrived, modem and instructions inside, and opening it to find…an aqua-green jellyfish-serpent cyborg!

Holding that creature in my hands — and there really was no way to think of it in any other terms — I could not help but think, “Man, these French people really do have a different way of doing EVERYTHING!” By this point I had been in the country for nearly a year, so this was not an uncommon thought for me (more like one I tripped over at least once a day), and yet…well, I laughed because there really was no other possible reaction. Then I connected the darn thing up — one end of it kchinged via standard RJ11 cable into the T-plug ADSL filter that plugged into the phone jack, the other connected via USB cable to my Dell Inspiron 3700 — and got to work.

Not long ago my ISP in Paris (Bouygues) informed me that my 100 M/ps service was being upgraded to 200 M/ps at no additional charge, which would’ve been cause for celebration if the service had actually changed moved out of its actual speed range of 20-40 M/bs.

As an American male born in and partially raised in Chicago and later seasoned in New York, I am fortunate to have what is doubtless the top U.S. sports fan’s pedigree (offer arguments to the contary in the Comments if you must, but…well, come on, really?). I can more than hold my own in any beery statistics-laden conversation, am a rabid fan of both the Chicago Cubs and the New York Giants, bask in having seen Michael Jordan ascend to the position of Greatest and Most Influential Team Sport Athlete of All Time (and also recall easily the days when Muhammed Ali held that position), am able to maintain the “High Road” in the face of any so-called sports fan from delusionally-skewed Texas or rant-before-they-think Philadelphia, and really don’t take it all that seriously while managing to be dead-serious about it all at the same time.

All of the above accepted as unshakeable truth, when I resolved to move to France back in 1999 I did so knwowing that the whole sports thing would be one of the hardest points of separation. The 5-8 hour time zone difference was something of a factor — though I am a scar-branded member night owl — but by far the biggest obstacle to maintaining my U.S. sports culture was to be the near-absolute lack of interest U.S. sports in France, and thus the complete lack of game-viewing options and opportunities. Horror! Still, in for a penny in for a pound, I let it all go…that is, until I became broadband-connected (see aqua-gree jellyfish-serpent cyborg item above in the first slot). First I got back baseball, via an Internet radio broadcast product called Gameday Audio (and baseball really is at its very best over the radio, anyway, as any true fan will tell you), and that just in time for the Chicago Cubs epic 2003 season which saw them…no, it’s just too painful. Broadband and broadband-connected technologies continued to improve, of course, and just a few years after I got baseball back via radio the floodgates opened with streaming video and — the coup de grace — the introduction of the Slingbox.

So for me, courtesy of a Slingbox I have set up in south Florida (thanks, Dad), broadband means the NFL on Sunday, the World Series, and all of the U.S. sports punditry (and idiocy) I can stand, all just an application click away. To paraphrase Warren Zevon in closing, “I’ll sleep when I’m dead.”

Evey morning upon sitting down with AppleKory, one of the very first things I do is check eztv.it for torrents of the television programs I keep up with broadcast the night before. Of course, I won’t say here what I do when I find those torrents. Before broadband, though, this daily exercise was not even possible (though before bittorrent there was KaZaA…and Helllllloooo Skype!).

And with that “Helllllloooo Skype!”…

Like 98.6% of the readers looking over these pixels, I am bound to at least one telephone line. Anyone with one of my telephone numbers can pick up any telephone and call me, and if I am not blocking the incoming number for some reason the odds are good that I will pick up. Landline, cellular…I have both (two landlines, in fact). If I do pick up, maybe I’ll even talk for a short while, though with the dovetailing advent of widespread broadband and instant messaging my career as a prodigious telephone talker came to a shockingly fast halt. Why talk, after all, when I can type nearly as fast (and when I am so much more well-written than well-spoken)? And if I do want or need to have a verbal exchange, why use up one of my hands holding a phone when I can instead make the voice connect over my broadband connection using Skype, or Google Hangouts, or whatever-whichever VoIP-driven service I can push my utterances through (and, yes, receive utterances back from) at little or not cost and without having to leave the comfort of my keyboard?