Tonight we are having pork curry. It’s been cobbled together from some leftovers from last night’s bbq and the use of some spices I bought last year when strolling through Lincoln market. I came across a stall selling Indian spices so I bought a few quid’s worth without really knowing when I’d make use of them.

Since then the garam masala mix has been used pretty extensively but we hardly seem to have touched the huge bagful. This time I roasted and ground some of the spices then fried them in oil and ghee together with garlic, ginger and green chili. Add onions, green pepper, bbd’d pork from last night, a tin of coconut milk and two of tomatoes and we are cooking on gas (yes).

Rugby has been watched but cricket ignored – I don’t think it’s going very well. Hannah and I have also been to deliver food to the collection point for the Calais refugees. The whole situation has caught everyone’s imagination and there was a constant stream of people delivering mostly clothes to the collection point down behind the Horse and Groom pub in Lincoln.

Hannah and I had been to Tesco to return the borrowed glasses we used for the party last night. Whilst we were there we stacked up with basic foodstuffs – oil, rice, flour etc for our donation. For some reason it gave me quite a pleasure on emptying the Tesco shelves of their value tomato puree. Maybe it was the ordered rows of tubes of puree that I liked although it was quite an emotional thing to fill the shopping trolley with food destined for people with a real need for it. I tried to imagine who it would end up with.

The whole refugee situation has become distressing. Over time my attitude to the refugees has changed from “these are just trying to get somewhere they can have a richer life” to “wow these are real people with really desperate problems trying to flee to somewhere safe where they can lead normal lives and their kids can go to school”.

We stacked up our trolley with food but in doing so wondered whether there was a more efficient way of using the money. Buying the food from a wholesalers rather than Tesco. Buying sacks of rice rather than small bags of the value stuff, though those did seem to offer the best value in-store. At least it made us feel that we were helping in our small way and unfortunately I’m not sure I trust big charities enough to donate them cash.

I think I will at least value the fact that we are able to have the curry in the comfort and safety of our own kitchen tonight rather than be hungry on some roadside or in a refugee camp somewhere in Europe. 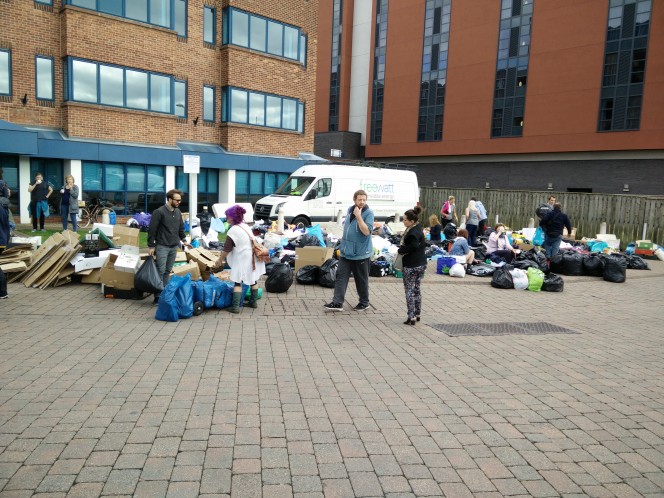