There’s a Post Office down the road from my mam and dad’s place with a Barclays ATM. Yesterday I strode up to said ATM with a view to extracting some cash. Totally legally of course.

Imagine my surprise when I was confronted with a screen showing what appeared to be Windows XP booting up. Wow I thought and reached for the gun in my holster phone in my pocket to capture the moment in pixels. I was too slow. I’d never have made a good cowboy.

By the time I had unlocked the phone and fired up the camera (checked the film, taken a light reading, adjusted the focus etc) all I got was a curt apology stating that the cashpoint machine was currently dysfunctional and would I mind awfully trying the one at the Isle of Man Bank down the road.

Disappointed I turned my back on the machine and walked dejectedly towards the IoM bank. I thought that might have been a scoop. “XP brings down global banking system”. Wasn’t going to be the same without the photographic evidence.

I parked the thought whilst we spent the afternoon enjoying the delights of Onchan Park on its opening day of the season. Crazy golf at its best. The pitch and put and the bowling were closed due to waterlogged greens but that didn’t spoil our fun.

This morning my thoughts returned to the global banking crisis but research suggests that nothing untoward had happened. No doom laden headlines. Shock horror probe. Must have been a local issue.

I did find a few timely articles discussing the fact that all the world’s ATMs appear to run on XP. Speculation as to whether this was a ticking time bomb together with quotes from Microsoft suggesting that a move to Windows 8.1 would be very sensible from a security perspective. No news at all really.

One does wonder what the next generation of ATM o/s will be. Microsoft doesn’t exactly feel right but there again it would probably be easiest from a backwards compatibility perspective. I’m not that interested. It’s Sunday morning and I’m typing this post with my thumb on my droid. There is bacon to be cooked.

I’ve been rolling my sleeves up at our Docklands Datacentres today. Having decommissioned all our old 155 Mbps STM1 pipes and replaced them with 622Mbps STM4’s we are now gearing up to replacing the 622’s with resilient Gigabit Ethernet connectivity to the BT21CN network.

The picture below shows part of the rack containing our first ever 155Mbps connection.  For those interested this was an STM4 partitioned into 4STM1’s.

For those not interested the real point is that this complete rack that was originally pretty much dedicated to hosting our central pipe connectivity to the BT ADSL network can now be replaced by a single port in a 3U chassis. You can get around 13 of these switches in a rack, each with potentially up to 15  GigE connections. In theory that’s up to 195 connections instead of just 4 with 313 x the bandwidth. 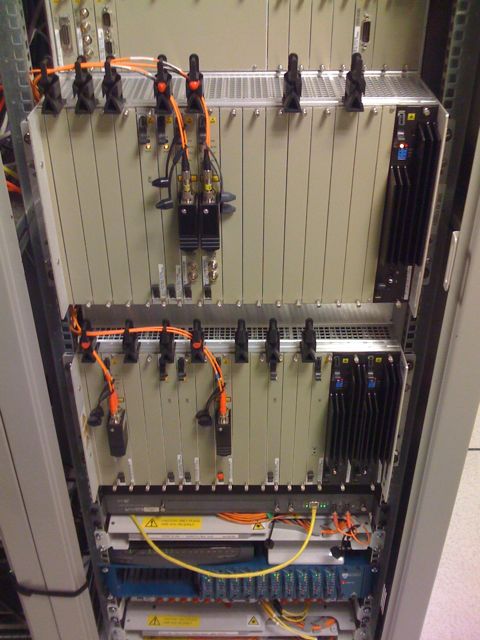 Old STM4 chassis. Couldn’t get the whole rack in view. This is only half of it.

3U chassis supporting up to 15 GigE connections