There’s a Post Office down the road from my mam and dad’s place with a Barclays ATM. Yesterday I strode up to said ATM with a view to extracting some cash. Totally legally of course.

Imagine my surprise when I was confronted with a screen showing what appeared to be Windows XP booting up. Wow I thought and reached for the gun in my holster phone in my pocket to capture the moment in pixels. I was too slow. I’d never have made a good cowboy.

By the time I had unlocked the phone and fired up the camera (checked the film, taken a light reading, adjusted the focus etc) all I got was a curt apology stating that the cashpoint machine was currently dysfunctional and would I mind awfully trying the one at the Isle of Man Bank down the road.

Disappointed I turned my back on the machine and walked dejectedly towards the IoM bank. I thought that might have been a scoop. “XP brings down global banking system”. Wasn’t going to be the same without the photographic evidence.

I parked the thought whilst we spent the afternoon enjoying the delights of Onchan Park on its opening day of the season. Crazy golf at its best. The pitch and put and the bowling were closed due to waterlogged greens but that didn’t spoil our fun.

This morning my thoughts returned to the global banking crisis but research suggests that nothing untoward had happened. No doom laden headlines. Shock horror probe. Must have been a local issue.

I did find a few timely articles discussing the fact that all the world’s ATMs appear to run on XP. Speculation as to whether this was a ticking time bomb together with quotes from Microsoft suggesting that a move to Windows 8.1 would be very sensible from a security perspective. No news at all really.

One does wonder what the next generation of ATM o/s will be. Microsoft doesn’t exactly feel right but there again it would probably be easiest from a backwards compatibility perspective. I’m not that interested. It’s Sunday morning and I’m typing this post with my thumb on my droid. There is bacon to be cooked. 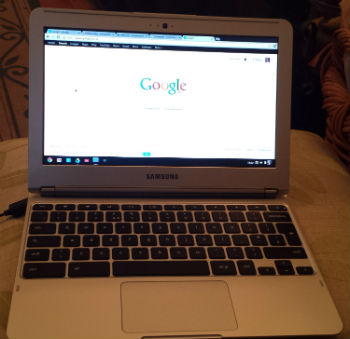 The most popular blog posts at the moment are those talking about problems with the Samsung Galaxy S3. In the last month I’ve had just under 7,000 page views of the “Galaxy S3 not charging” posts here and here (in order of popularity) and over 4,600 views of the “problem with headset socket on Galaxy S3” post. That last post has had over 14,000 views since it was written (as an aside it’s surpassed only by the “how to bypass Pirate Bay filters” post which has had over 18,000 views).

That’s a lot of problem phones out there. 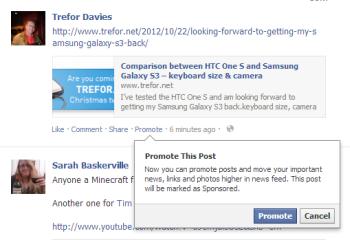 I linked to that last post on why I want my Samsung Galaxy S3 back from Facebook. I wanted to make sure that none of my friends missed the post otherwise no-one might read it:).

For the first time ever I got this popup/toast/whatever they call it suggesting I might want to pay to promote my post.  I could “move my important news, links and photos higher in the news feed” and the post “will be marked as sponsored”. 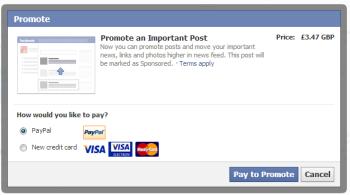 I’ve never seen this before and certainly wouldn’t dream of giving money to Facebook for the “privilege” of them promoting my post. What’s more there is no mention of how long the promotion will last, what position it will have in the feed, basically nothing that specifies what I get for the cash.

I clicked through as if I was going to buy and found that they wanted £3.47 for this privilege. It was almost tempting to pay the 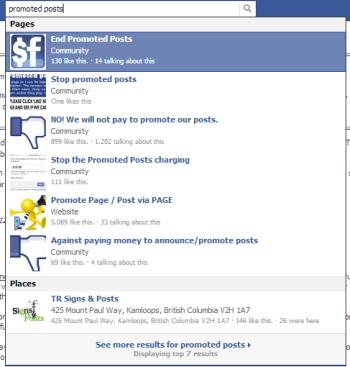 money to find out what happens but I’m sure that most of my friends would think I was off my trolley if I did this.

In an attempt to find out what I would get for my money I searched Facebook for “promoted posts” but it only came up with a few user groups protesting about the fact that Facebook was now offering promoted posts.

Frankly who cares? I guess some businesses might want to sign up but Facebook haven’t exactly done a good job of selling it – at least not to me.

This morning I found that one of my blog posts had the word “bookmark” inserted at the beginning. Weird I thought. This afternoon I did another post and lo and behold it was there too. In fact it was on every post I’d ever written. Very weird.

So I went down to see Ian Ward, one of our resident web design gurus and we both started fishing about to see what the problem might be. Perusing through the plug ins we noticed that “Social Sharing Toolkit” had an  upgrade available. This was to fix a problem where the plug in was “inserting words” into blog posts.

We clicked “upgrade” and hey presto, problem over. I must have subliminally upgraded the plug in first thing this morning. The watchful eyes of the wordpress community spotted the problem and now it is fixed.

Much as it pains me I have to tell you that the headset socket on my Samsung Galaxy S3 is not working. I found out because during the week I started to net no audio on my phone though it would work in speakerphone mode.

When this first happened I checked all the settings and there was nothing obvious. Switching bluetooth off seemed to do the trick and I put it down to somehow the phone not having unhitched itself from my Parrot car kit. I can see my car from my panoramic office window:)

It must have been a coincidence because it is now happening all the time. In the wee small hours of this morning I woke up and googled the problem. I found an android forum with a thread that showed the same problem on a different model of handset.

If you had been using the headset sometimes the sensor didn’t work to show that the plug was no longer in the socket. I had to wait until morning to confirm this on my phone. My wife Anne would not have been too happy if I had accidentally switched something noisy on the phone during the night.

I can indeed confirm that the problem lies with the headset socket. Nothing in fact works through the headset.

Sigh. Someone on Twitter mentioned that this sort of thing often happens when a phone reaches end of life. Unfortunately this is the wrong end.

Its worth noting I still haven’t finished testing all the features on the Samsung Galaxy S3. The bit where the phone isn’t supposed to switch off doesn’t seem to work all the time and I have supposedly disabled the LED for alerts but it still comes on. Early days for the S3 I guess.

We are about to find out how well the returns system works!