Just done a bit of an experiment. I deleted a load of spam comments from the blog yesterday at 6am and this morning gone back in and counted the little critters again. In just over 24 hours I’ve picked up another 606 spam comments. There may be some legit ones in there but they ain’t gonna be seen amongst the dross (sorry yawl).

It’s basically around 25 spam comments an hour. We never see spam emails any more, at least not when using gmail. This isn’t entirely true as I do get crap from “seo experts” who address me as “Hi” and quote the “can spam act” in the footer. They always get labelled as spam (may have mentioned this before but it’s an ongoing situation).

I’m sure the 25 spam comments an hour far exceeds the rate of spam emails when we used to get them. Although this spam is mostly captured (Akismet) you do have to occasionally remember to permanently delete it or it would start filling up the server.

In the way you used to get quotes about the size of the global email spam problem it would be interesting to look at the equivalent stats for comments.

The pics below show zero comments initially then 616 a day later. There is something very satisfying about pressing the “empty spam” button. It’s a bit like driving down a clear motorway when there is a 10 mile tailback going the other way.

I wonder what the clickthrough rate for a spam comment is. Must be infinitesimally small. You would have to be paticularly stupid to click on one of the links. 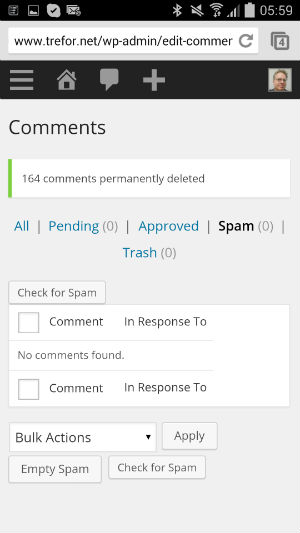 We had a good go at it guys. When I first discussed the world record attempt for “most comments on an online news post” with the Guinness World Records® people there was no record in place. We came in at 5,455 comments in 24 hours.

Unfortunately in the meantime a Japanese pop star – don’t ask me his name, I was too distraught to register it1  – has come in with 56,800 on his fan website. Apparently a quarter of all his registered fans left a comment. That’s life folks.

However we should not be dismayed. We should rejoice. First of all we raised just over £6k for the RNLI. The RNLI needs £150million a year to keep going. That’s a lot of two pences rolling down that lifeboat donation box and every little helps.

Secondly I contacted Charles Arthur, Tech Editor of the Guardian who after digging around a bit discovered that the most comments ever on a Guardian news post was 4,789.  The Guardian is reputed to have a monthly unique readership of 50 million people globally so the fact that we beat their number for most comments is huge news. NOTW phone hacking not unsurprisingly seems to be the subject that generally attracts most people to comment at the Guardian.

Perhaps I’ll change the subject next time to something more inflammatory. I think we will have another go – next year maybe. There was huge enthusiasm amongst everyone who participated. The main feedback from GWR, apart from the fact that they enjoyed following the attempt was that it appears that this sort of record is generally best suited to celebs with huge  followings. A bit obvious but perhaps we can prove that wrong someday:)